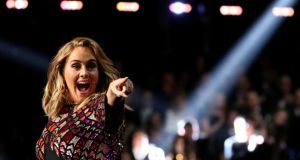 For Irish music radio stations, Spotify is more like Adele: gloom-inducing and inescapable. The streaming service has a solid fanbase in this market, with 340,000 users on its ad-supported free version alone. Photograph: Lucy Nicholson/Reuters

Forget Twitter (if you can). The great loss-making success story of our age is Spotify, the streaming service that dances along a perilous financial line even as it revolutionises listener habits just by existing.

Spotify’s users love Spotify. It is undeniably popular. But reports that the Swedish music giant plans to delay its stock market flotation until 2018 has pricked ears for all the wrong reasons.

As a leading tech “unicorn”, it is a smash hit. Once it goes public, it is difficult second album time. Its status as a private company that is yet to go down the initial public offer (IPO) route postpones the most intense and impatient levels of financial analysis, and you only have to ask Twitter’s carousel of senior executives about how that level of scrutiny feels.

Spotify’s number one predicament appears to be this: it has yet to finalise new licensing deals with major record labels. No deals, no Spotify. Its path to profit, despite signing up some 40 million paying subscribers, starts to resemble the career of the Rolling Stones: never-ending and laden with obvious risks.

For Irish music radio stations, Spotify is more like Adele: gloom-inducing and inescapable. The streaming service has a solid fanbase in this market, with 340,000 users on its ad-supported free version alone. It is the market leader among streaming services here, as it is globally.

Research from Ipsos MRBI suggests two-thirds of 18-34-year-olds stream online audio from somewhere on a regular basis, with an average of 40 minutes listening time per session.

For Irish music radio stations, Spotify is more like Adele: gloom-inducing and inescapable

Separate figures from research group TNS, issued by Spotify’s Irish advertising sales house Digitize New Media, suggest its ad-supported, free version has a greater reach in Ireland than it does in most other European markets, including the UK, with the free tier reaching 20 per cent of the total Irish audience and 28 per cent of 15-34-year-olds each week.

Its listeners in the 15-34-year-old category have a slight male and Dublin bias, a high level of education and a higher income level, according to Digitize. They are also likely to be classified as early adopters and heavy consumers of social media – particularly Twitter, Instagram and Snapchat. The message here is that brands which want to reach this audience can do so through Spotify.

A century after the first broadcast (a Morse code affair), radio remains central to Irish culture, and woe betide the first politician who floats the idea of going down the Norway route and switching off FM signals. Even 15-35-year-olds listen to an average of three hours and 22 minutes of radio a day (although not all of it on FM).

While research has also shown that streaming affects listening to music on MP3 players and CDs more than it does radio, the market has reached “a tipping point”, Core Media says. The agency forecasts that advertising revenue in the Irish radio sector will drop 3.5 per cent this year, after a 6 per cent fall in 2016.

Quite apart from losing a chunk of cash to digital competitors (Spotify itself has limited advertising inventory), the big fear for radio is that it will fail to recruit younger listeners to the same extent that it was guaranteed to in the past.

Spotify, which has more than 100 million users worldwide, has notably upped its music discovery game since 2015, with personalised, algorithm-produced playlists such as Discover Weekly complementing the human-picked list New Music Friday. It’s also flirting more and more with podcasts, but then aren’t we all?

So, while the moment has not quite arrived to compile bankruptcy-themed playlists and get nostalgic for the Spotify era, the cymbals will come crashing down on the streaming service unless it does something soon.

Listeners may be the only winners here. Spotify occupies that odd, but hardly unique, position in today’s connected culture. It is an industry disrupter credited with causing massive financial headaches in the industry it disrupted, while simultaneously failing to make any money itself.

And we are now just a few bars away from this ballad’s make-or-break chorus. There is the risk that the big music labels, which have supported it and invested in it to date, might pull the plug on its jukebox, or that more big-name artists may make like Taylor Swift and Beyoncé, opting to keep their albums off it.

Then there is another looming risk – for almost a year, the company has been carrying $1 billion (€0.94bn) in private equity debt that is tied to the timing of its IPO. The longer it delays, the more costly it could prove. So, while the moment has not quite arrived to compile bankruptcy-themed playlists and get nostalgic for the Spotify era, the cymbals will come crashing down on the streaming service unless it does something soon.