INM in talks on possible takeover of Irish Examiner – report 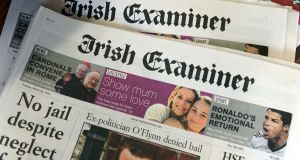 The Irish Independent and Herald owner is in talks with the rival Irish Examiner and Evening Echo about a possible takeover, according to the Sunday Times.

The newspaper reported the Irish Examiner’s owner, Cork-based Landmark Media, is considering a deal with Independent News & Media (INM) as one way of tackling its €21 million debt.

INM, 29.9 per cent owned by billionaire Denis O’Brien, would face competition issues if it attempted an outright purchase of Landmark. The Broadcasting Authority is currently looking at its proposed acquisition of regional newspaper publisher, Celtic Media Group. Media mergers can be referred to the Minister for Communications and Natural Resources, currently Denis Naughton, for approval.

Landmark, owned by Tom and Ted Crosbie, whose family has owned the Irish Examiner since the 19th century, took most of the assets of the old Thomas Crosbie Holdings out of receivership in 2013 with the backing of AIB.

Those interests include eight regional newspapers, shares in radio stations, and news and job websites. The Sunday Times stated that the talks with INM focus on the Examiner rather than the group as a whole. The daily title had a circulation of 30,090 copies in the second half of last year, 7.8 per cent less than the same period in 2015.

A spokesman for INM declined to comment, as did Landmark and its chief executive, Tom Murphy.

Provisional figures provided by the Minister for Finance, Michael Noonan, to the newspaper show that the €113 billion industry paid income tax and universal social charge of €128 million last year.

A recent Central Bank study of the industry showed that its revenues reached €11.8 billion in 2015 and it had assets of €113 billion, namely the 4,000 aircraft belonging to the lessors that operate from the Republic.

The €52 million corporate tax was a 52 per cent increase on the €34 million the industry paid in 2014, when its revenues were €9.4 billion. Mr Noonan confirmed that the total tax on the industry’s profits was €445 million over a five-year period leading up to 2016.

During the same five-year period, the newspaper said that net VAT repayments to the sector hit tax receipts by €133 million.

The US investigation began last March, around the same time that Norway’s wealthy sovereign investment fund decided to exclude ZTE because it had concerns about the Chinese group.

Last week, shortly after news of its deal with Digicel emerged, Reuters reported that ZTE had been granted “a slightly longer reprieve from export restrictions imposed by the US government as it seeks to resolve a probe of alleged violations of US sanctions on Iran”.

The US commerce department extended ZTE’s temporary export licence until March 29th, the news agency said. This means that US companies can continue to supply the Chinese group despite concerns raised in March last year.

Digicel signed up ZTE to upgrade the telecoms company’s networks as part of an overhaul of the debt-laden group that is likely to involve about 1,500 layoffs. It will begin seeking voluntary redundancies next month. Digicel owes its creditors €6.2 billion.

The company operates telecoms networks in the Caribbean, Central America and South Pacific.