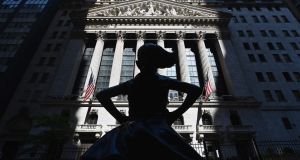 Wall Street stocks are poised to record the best quarter in more than two decades amid a broad rally in global markets.

Wall Street stocks are poised to record the best quarter in more than two decades amid a broad rally in global markets ignited by a barrage of central bank stimulus and hopes of a forceful economic recovery.

The S&P 500 has soared more than 18 per cent over the past three months, leaving it on track to notch the largest rise since the final quarter of 1998. Developed and emerging market stock prices overall have jumped 17 per cent in the second quarter, according to MSCI’s All-World index.

Stimulus measures announced by central banks around the world, including a series of interventions by the US Federal Reserve to soothe unsteady markets, helped lift stocks in April, said Max Kettner, strategist at HSBC. Rising hopes for a rapid recovery in major economies helped keep the momentum going later in the quarter, he said.

“Equities rebounded significantly in the second quarter with more than three-quarters of the losses in [the] first quarter already recovered,” he said.

Still, many investors remain cautious given the uncertain trajectory of the coronavirus pandemic and questions over how quickly major economies will recover from the acute shock. The US, the world’s biggest developed market, has remained a source of particular concern given the severe Covid-19 outbreaks in several states.

“The resurgence in the virus is not a surprise,” said Ethan Harris, an economist at Bank of America. “However, downside risks are growing.”

Mr Harris said he expected “some reversal in economic activity in the hotspots as rules are reluctantly reversed and people become more cautious”. Goldman Sachs research indicates lockdowns are tightening or the easing of restrictions has been put on hold for 40 per cent of the US population.

Willem Sels, chief market strategist at HSBC Private Banking, said the key question now was whether Covid-19 flare-ups “become systemic enough to change the positive momentum in earnings revisions and economic growth, or will people take the view - as I think they currently do - that we have bottomed in terms of that”.

Equity markets in the US and Europe were muted on Tuesday. The S&P 500 rose 0.2 per cent in morning trading, with the Stoxx 600 down 0.4 per cent in afternoon dealings.

Investor sentiment was buoyed in Asia by a pick-up in activity at China’s factories, with the official manufacturing purchasing managers’ index beating economists’ predictions in June.

“The increase in PMI is consistent with a further expansion in industrial production in June in contrast with other countries in Asia,” said Mitul Kotecha, an emerging market strategist at TD Securities. “The PMI data will likely be supportive for risk assets in the near term.”

Asia-Pacific markets were broadly higher on Tuesday. Japan’s benchmark Topix index rose 0.6 per cent as Australia’s S&P/ASX 200 gained 1.4 per cent. China’s CSI 300 index of Shanghai and Shenzhen-listed stocks was up 1.3 per cent while Hong Kong’s Hang Seng added 0.5 per cent.

Oil prices slipped after rallying on Monday following positive economic data from China and Europe. Brent crude, the international benchmark, fell 1.3 per cent to $41.18 a barrel, while West Texas Intermediate, the US marker, dropped 0.8 per cent to $39.40 ( €34.92) a barrel.

The dent to prices came as Royal Dutch Shell said it would cut up to $22 billionn from the value of its assets as it warned that the pandemic would deal a lasting blow to demand for energy products and the global economy, sending its shares down about 2 per cent in London trading. – Copyright The Financial Times Limited 2020