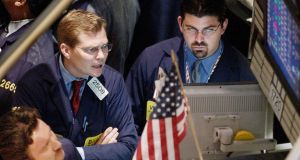 European shares retreated on Thursday as a spike in Covid-19 cases in China and some US states triggered fears of a second wave of infections, knocking back hopes of a swift recovery from the pandemic-led economic slump.

Investors scaled back on risk as the daily count of cases hit new highs in California and Texas, two of the United States’ most populous states, while Beijing ramped up movement curbs on Wednesday.

The pan-European Stoxx 600 index fell 0.3 per cent after two straight days of gains, driven by optimism over global stimulus helping economies claw back from the coronavirus-led slide. “For all the optimism that central bank and government stimulus will help alleviate more permanent economic scarring, there is rising concern that any recovery is likely to be less V-shaped and more a long U-shaped type of rebound,” said Michael Hewson, chief market analyst at CMC Markets UK.

Cyclical stocks led declines, with oil and gas, miners and banks falling about 1 per cent each, suggesting the mood remained largely risk-off in early European trading. Aggressive monetary and fiscal stimulus and less-than-dire economic data have helped European indexes regain about 36 per cent from their March lows, but analysts say another wave of infections could lead to worries of more restrictions and weigh on consumer behaviour.

Madrid-listed shares of Siemens Gamesa tumbled 8.2 per cent after the wind turbine maker replaced chief executive Markus Tacke with Andreas Nauen and warned of an operating loss in the third quarter late on Wednesday. German online fashion retailer Zalando rose 5.3 per cent to the top of Stoxx 600, after forecasting a bigger increase in sales and operating profit in the second quarter than analysts’ expectations as the pandemic prompts more people to shop online. Wirecard, a Germany-based payments company, shed 3.6 per cent after being hit by allegations of accounting irregularities ahead of the release of its 2019 financial statement. . The European Council is in focus as it meets on Friday to discuss a recovery proposal by the bloc’s executive arm to raise €750 billion worth of debt to top up spending from joint coffers to be worth 1.1 trillion euros in 2021-27. - Reuters