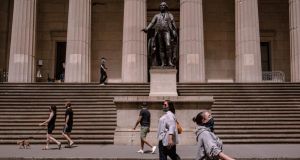 European stocks closed higher after a choppy session on Thursday, with improving economic data and more support from the European Central Bank helping to lift sentiment.

Equities fared better after the ECB announced it will offer euro loans against collateral to central banks outside the euro zone to backstop funding markets.

The Iseq index ended 0.4 per cent lower, going against the positive trend across Europe as the Dublin market was dragged down by falls for its biggest stocks. Building materials group CRH closed down 1.2 per cent at €29.99, while Ryanair joined in declines for travel stocks, finishing 1.7 per cent lower at €10.55.

However, Dalata Hotel Group rose 3.9 per cent to €2.91 after analysts at Jefferies commenced coverage of the Covid-battered stock, giving it a “buy” rating and suggesting investors did not appreciate its growth prospects or strong balance sheet.

The blue-chip FTSE 100 ended 0.4 per cent higher, while the domestically-focused mid-caps index slipped amid worries over the economic damage being wrought by the coronavirus pandemic.

The postal company slipped 12.4 per cent after it reported a 31 per cent fall in profits and scrapped dividend payouts for 2020-2021, while also announcing a restructuring plan that includes 2,000 job cuts.

Low-budget airline EasyJet shed 9.5 per cent a day after reporting a bigger loss for the first half of the year. Among other decliners, subprime lender NSF tumbled 32.2 per cent on flagging risks to its going-concern status.

The benchmark Stoxx 600 index rose 0.7 per cent. In Germany, the Dax also finished 0.7 per cent higher, boosted by airline Lufthansa and car stocks, while the French Cac 40 finished up 1 per cent.

Lufthansa jumped 7.1 per cent after billionaire investor Heinz Hermann Thiele dropped his objections to a €9 billion government bailout of the airline.

However, in a first for a constituent of the Dax, payments firm Wirecard collapsed owing creditors almost $4 billion after disclosing a gaping hole in its books. Its shares slumped 71.3 per cent.

French pharmaceutical company Sanofi edged up 0.9 per cent after Reuters reported the drugmaker is considering cutting hundreds of jobs. Germany’s Bayer ended down 2.9 per cent, reversing earlier gains, after agreeing to pay as much as $10.9 billion to settle US lawsuits claiming that its widely-used weedkiller Roundup caused cancer.

Walt Disney fell 2 per cent after it delayed the reopening of theme parks due to the health crisis. A report also said the company was considering postponing the July 24th release of the film Mulan.