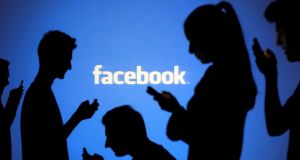 Facebook shares plunged more than 18% after the social media giant said profit margins would plummet for years due to costs to improve privacy safeguards and slowing usage in its big advertising markets. Photograph: Reuters

Thursday’s biggest story was Facebook’s plunge caused by disappointing results and ultimately resulting in tech stock carnage in the US on the day.

The contagion, however, was contained on the back of news that the US and the EU planned to negotiate on trade. That announcement also buoyed European shares, which rose to a six-week high.

Although up slightly on the day Ryanair underperformed its airline peers, closing up 0.35 per cent at €14.14. The stock appears to be struggling to shake off negative sentiment, although did move higher after lunch. Ryanair announced that it was cancelling 20 of its 300 planned flights on Friday, August 3rd, as a result of ongoing strike action.

Both of Ireland’s pillar banks advanced on Thursday, with significant volume recorded in AIB. Bank of Ireland increase 1.91 per cent to €7.215, while AIB, with over six million shares traded, went up 1.58 per cent to €4.90.

Irish Ferries owner Irish Continental Group advanced the most on the Iseq 20, closing up by 2.53 per cent at €5.27, while explorer Providence Resources was highest on the wider index, up 4.17 per cent to €0.125.

Top fallers on the day included hotel group Dalata and drinkmaker C&C, although both had little in the way of volume traded.

Building materials giant CRH advanced 1.51 per cent to €30.24, helped by positive reports from US peers.

British American Tobacco’s shares jumped 5.13 per cent and were set for their best day since 2009 after the tobacco company’s first-half results beat expectations, with sales jumping 57 per cent.

AstraZeneca’s shares were up 4.19 per cent after it said new drugs performed strongly in the second quarter, buoying hopes for better times ahead.

The biggest faller on the day was SSE, down 5.86 per cent.

The pan-European Stoxx 600 index ended up 0.9 per cent, further supported late in the session by a fall in the euro after ECB president Mario Draghi reaffirmed a commitment to keep interest rates low through next summer.

Germany’s exporter-heavy DAX, which has come under pressure due to uncertainty over global trade relations, rose 1.8 per cent, its biggest one-day gain since early April.

European autos were the biggest sectoral gainers, up 2.6 per cent. The sector has been hit particularly hard, with tariff threats forcing carmakers on both sides of the Atlantic to cut their guidance. Daimler rose 2.8 per cent, overcoming initial weakness that followed second-quarter results showing its profit was hit by weaker pricing and tariffs.

Facebook’s plunge sparked a sell-off in high-growth stocks that sent the Nasdaq lower on Thursday, but the contagion was contained by optimism after the United States and the European Union said they would negotiate on trade.

Facebook shares dived more than 18 per cent, set for its biggest one-day percentage drop ever, after the social media giant said profit margins would plummet for years due to costs to improve privacy safeguards and slowing usage in its big advertising markets.

Other high-flying stocks were also lower. Netflix, Alphabet, Amazon and Twitter all fell, with the tech sector as a whole retreating.

However, the other 10 major S&P sectors were higher, with industrials keeping the Dow Jones Industrial Average firmly in positive territory.