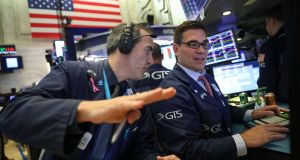 European shares fell on Friday as earnings updates disappointed, with automotive sector stocks bearing the brunt of trade tensions that caused a sell-off in the Chinese yuan overnight.

As US officials work towards slapping tariffs on car imports, auto shares were the biggest fallers, down 2.1 per cent.

The Iseq index fell 0.7 per cent as its biggest stocks CRH and Ryanair both finished in the red. The building-materials group fell 1.4 per cent to €29.97, while the airline ended 1.9 per cent lower at €15.55 as industrial relations disputes continued.

Providence Resources climbed 16.7 per cent on low volume after it said it was hopeful of an oil discovery off the southwest coast. Cairn Homes added 0.5 per cent on a day when it announced that its three founding directors would receive a further €47.8 million of ordinary shares in the house builder.

Bank of Ireland was among the gainers, finishing up 1.4 per cent at €6.73, while food group Glanbia also had a good day, adding 0.5 per cent to €15.25. Paper and packaging company Smurfit Kappa fell 1.3 per cent to €34.14 after a negative update from one of its peers.

The Ftse 100 was little changed, holding most of its ground and outperforming a broadly negative European market as global trade uncertainty and political troubles closer to home spurred demand for defensive stocks and earnings filtered through.

The blue-chip index ended down 0.07 per cent, but scored its second week of gains, as its internationally exposed stocks found support from weakness in the pound.

Earnings were also in focus. Shares in insurer Beazley fell 1.5 per cent after the company reported a steep fall in pretax profit as rising US interest rates took their toll on investment returns.

Unilever rose 0.7 per cent, with the stock also buoyed by a number of target price upgrades from brokers.

The broader pan-European Stoxx 600 fell 0.15 per cent, with losses capped by gains in healthcare and consumer staples, considered less risky sectors. Italy’s Ftse MIB, down 0.4 per cent, underperformed on reports of rising tensions within the country’s coalition government.

Swedish builder Skanska was another prominent faller, down 4.6 per cent after reporting an unexpected drop in second-quarter profit due to new project writedowns at its struggling US construction business.

Wall Street stocks rose on Friday as solid results from Microsoft lifted technology stocks. Microsoft rose as much as 3.6 per cent to a record high of $108.20 and boosted all three of the main indexes.

Donald Trump’s comments on tariffs, which followed after the US and China imposed levies on $34 billion worth of each other’s goods this month, worried investors already concerned by the impact of a strengthening dollar on corporate results.

Industrial conglomerate GE fell 4.8 per cent after it cut its annual cash target, and its chief executive estimated new tariffs on its imports from China could raise its overall costs by $300 million to $400 million.

Shares of the world’s largest construction and mining equipment maker Caterpillar fell 1 per cent and 3M slipped 0.5 per cent.