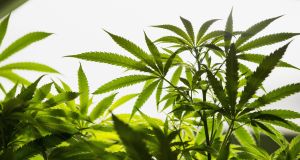 Originally listed on the Toronto stock exchange, Canopy, a producer of medical marijuana, achieved a dual listing on the NYSE in May. Photograph: Matthew Staver/Bloomberg

Wall Street will play host to the latest effort by the marijuana industry to move into the financial mainstream on Thursday when trading in Tilray, the Canadian medical cannabis producer, starts on Nasdaq.

Shares in the first cannabis producer and distributor to go public on a US exchange priced late on Wednesday at $17 (€14.60), above an indicated range of $14-$16 a share for the initial public offering, raising $153 million and giving the company a market value of $1.56 billion.

A US listing gives companies access to large pools of capital and heightened levels of publicity. US exchanges are able to list companies so long as their operations are legal in the jurisdiction where they operate.

“You have a much easier path to finding capital and a much cleaner way to invest,” said Sean Stiefel, a portfolio manager at Navy Capital, adding that the US was beginning to “institutionalise” cannabis investment.

Both Nasdaq and the New York Stock Exchange have accepted companies that were already listed in Canada as well as listed shares of companies that operate in cannabis-related business.

Originally listed on the Toronto stock exchange, Canopy, a producer of medical marijuana, achieved a dual listing on the NYSE in May. Similarly, Toronto-listed Cronos Group began trading on Nasdaq in February.

Nasdaq is also home to MTech Acquisition Corp, a special purpose acquisition vehicle, or Spac, that intends to buy companies “ancillary to the cannabis industry”.

Medical use is authorised at the federal or national level in 29 countries, according to Tilray and, in October, Canada is expected to become the first major industrialised nation to legalise adult-use cannabis at the federal level. Citing figures from the UN, Tilray put the value of the global cannabis market, including the illicit market, at an estimated $150 billion annually with more than 180 million estimated users.

Momentum of cannabis shares and the perceived market opportunity are the lure for buyers, but there are risks beyond the remaining legal uncertainties. Mr Kennedy noted that Tilray remained unprofitable in a highly competitive industry.

Since it began operations in 2014, the company has yet to turn a profit, clocking a net loss of $7.8 million in 2017 and $5.2 million for the three months ended in March.

Proceeds will help fund an expansion plan aimed at increasing its production space from about 60,000sq ft to about 912,000sq ft as well as debt repayment, working capital and acquisitions.

1 Basic income for all: Has the Covid crisis given us a new economic model?
2 Only way is up for Stripe as valuation skyrockets
3 Promontoria barred from pursuing doctor over Ulster Bank loan
4 ‘I don’t need to do any of this. . .I don’t actually need to work.’
5 Fiona Reddan: Who’s afraid of Revolut? Not AIB and BOI it seems
6 ‘Make plans but don’t hold on to them too seriously’
7 Kinzen raises $2.2m as it helps clients fight ‘misinformation’
8 Unilever’s Dutch and British arms merge after 90 years ahead of Brexit
9 Online shoppers face unwelcome tax surprise
10 Admission of mistake in Oxford vaccine dose raises doubts over reliability
Real news has value SUBSCRIBE