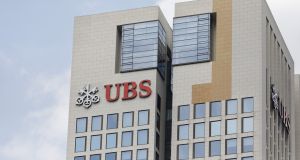 Irish banks rode the wave of positivity that flowed through the European financial sector following good results from UBS. AIB finished up 1.9 per cent at €4.78, while Bank of Ireland, which reports its own results next week, closed up 3.6 per cent at €6.95 per share.

Ryanair continued its annus horribilis after Monday’s announcement that Q1 profits were down 20 per cent due to higher pilot costs and strikes. It finished Tuesday down 3.4 per cent to €14.

The airline’s sometime competitor, Irish Ferries owner Irish Continental Group, regained some ground, finishing the session up 2.6 per cent to €5.19.

Metal prices rose which in turn meant mining stocks were in demand. By the market close, Anglo American, Glencore and BHP Billiton were all up by more than 5 per cent, making them the three top risers on the FTSE 100.

Dundrum Town Centre-owner Hammerson unveiled plans to offload £1.1 billion in assets and hand millions back to shareholders in a move meant to appease investors after profits plunged. The property giant posted a whopping 80 per cent drop in pre-tax profits to £55.8 million over the six months to June 30. Shares closed the session 3p higher at 529p.

Shares in Fever Tree sparkled after the drinks company posted impressive sales growth and said it would be “comfortably” ahead of its financial targets for the year. The firm’s revenues for the six months ended June 30th soared 45 per cent to £104.2 million, boosting its shares by 195p to 3,650p.

Superdry fell 9.5 per cent after the retailer’s co-founder Julian Dunkerton scooped £71 million from selling off another chunk of shares in the business.

The pan-European Stoxx 600 accelerated gains to touch its highest level in more than a month, ending up 0.9 per cent, with heavyweight UBS among the biggest boosts, up 4.3 per cent after Q2 profit topped expectations.

Gains in UBS boosted the banks sector up 2.2 per cent, with Credit Suisse, Italy’s Unicredit and Spain’s BBVA climbing 2.2 to 3.6 per cent.

PSA Group jumped nearly 15 per cent after the Peugeot owner reported strong profits thanks to a turnaround at its newly acquired Opel-Vauxhall division. The stock hit its highest level since June 2008, a 10-year high.

Austrian chipmaker and iPhone supplier AMS jumped as much as 13 per cent before paring some gains after the company said new orders would secure strong growth in the second half, and reported higher than expected second-quarter revenue.

The Nasdaq Composite hit a record high on Tuesday as Alphabet’s blowout results sparked a rally in high-growth stocks and bolstered expectations of a robust earnings season, while a rise in oil and metal prices boosted energy and material companies.

Shares of Alphabet jumped 5.3 per cent to an all-time high of $1,275.00 after the online search giant’s quarterly results trounced Wall Street targets. The Google-parent was the biggest boost to the S&P 500 and helped push the S&P technology sector 0.82 per cent higher. Facebook and Amazon were up 1.6 per cent and 1.4 per cent, respectively. Both report later this week.

Agriculture-related stocks gained on news that the Trump administration plans to announce aid for US farmers to help protect them from the repercussions of spats between the United States and its trade partners. Caterpillar jumped 2 per cent, while Deere gained 4.2 per cent and Agco 1.8 per cent. – (Additional reporting: Reuters/PA)