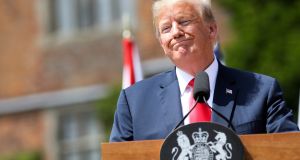 A growing chorus of observers is saying that financial markets are too sanguine about the threat that a US-instigated trade war poses to global output and asset values.

The International Monetary Fund joined the fray Monday, echoing warnings from investors including Larry Fink that trade friction could upend the current market-friendly backdrop of low volatility in equities and rates, and crimp economic growth. For Paul Tudor Jones, the list of worries should also include the spectre of higher borrowing costs and America’s expanding deficits.

Complacency is becoming a buzzword among some market veterans, with stocks gaining for three straight months and a measure of yield swings near an all-time low. But Mr Fink, BlackRock’s chief executive officer, predicts that stocks could drop 10-to-15 per cent if the Trump administration goes forward with tariffs on an additional $200 billion of Chinese imports. And HSBC Holdings says protectionism adds to the headwinds for risky assets.

“We have been making a similar call to the IMF on risky assets for a while, calling it a slow-motion credit crunch,” said Steven Major, global head of fixed-income research at HSBC. He says growth is under threat from forces including Federal Reserve rate hikes, trade-war escalation and higher energy prices, “and the way it likely plays out is through a gradual deflation of over-valued assets, those that have been distorted most by quantitative easing.”

The assets at risk in his view include include equities, investment-grade credit and emerging-market securities. He forecasts the 10-year Treasury yield will end 2018 at 2.3 per cent, down from about 2.85 per cent now.

A Bank of America Corp. index that uses options to measure the outlook for volatility in the $15 trillion Treasuries market fell the past five weeks, to 48 basis points, just above its record low of 44 basis points set in November.

“There is some complacency, with volatility being so low,” said Gene Tannuzzo, portfolio manager at Columbia Threadneedle Investments, which oversees $4.3 billion. “There is some chance rates could go higher, but in a bad outcome – such as on trade – they can go a heck of a lot lower.”

He says the firm has added Treasuries this year to hedge against weaker growth on the back of the trade standoff.

The yield on the benchmark 10-year note, which climbed to an almost seven-year high in May, has dropped back below 3 per cent. And the trade backdrop has some strategists questioning their predictions for higher yields. The median forecast in a Bloomberg survey calls for 3.15 per cent by year-end.

The potential for spiraling rounds of tit-for-tat tariffs has also helped fuel the trend of yield-curve flattening, which has some Fed policy makers wary given that inversion tends to precede a recession. Some gauges of the curve are the flattest since 2007.

And if history is any guide, investors may not want to be so confident about the rebound in share prices from February, when the S&P 500 had its fastest peak-to-trough correction since 1950.

But encouraged by rising earnings and three straight months of gains, equity fund managers appear to harbor few doubts. Going by positioning, they’re only a tad less bullish now than they were in the days before the plunge started.

One thing bothering analysts is the time it’s taking to recover from the February losses. Money manager Leuthold Group counts 33 selloffs in the last seven decades that began as violently as this one before quickly reversing. All but one was over by now.

In other words, the longer the S&P 500 goes without reclaiming its high from January, the more likely it is that February and March will prove to be just a prologue to even worse selling later in the year.

For BlackRock’s Fink, it’s simple: If President Donald Trump pushes through the next round of tariffs on China, “all bets are off” on the outlook for growth.

Protectionism and Fed hikes are already roiling some markets. Developing-nation stocks lost almost 8 percent in the first half of the year, according to MSCI data.

Stephen Jen, chief executive of hedge fund Eurizon SLJ Capital and a former economist at the IMF, the World Bank and the Fed, expects the tough rhetoric between Washington and Beijing to prove just that, with a compromise coming by September.

Nonetheless, he sees the flat yield curve as sending the right message -- that as the world’s most powerful central bank tightens policy, growth should slow, and shares and yields should eventually fall.

“Trade is obviously another important factor for the global economy,” he said. “But it’s the inability of global stock markets and the U.S. housing market to absorb the Fed rate hikes that will lead to a downturn in the U.S. and therefore the global financial cycle.”– Bloomberg