European shares fizzle out on poor results and slide in commodities

UK retailer Sports Direct down 7.2%, mainly due to loss on its investment in Debenhams 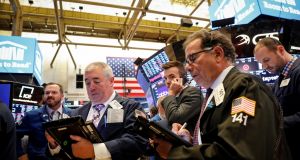 Traders on the floor of the New York Stock Exchange on Wednesday. Photograph: Brendan McDermid/Reuters

A rally in European shares fizzled out on Thursday after some poor company results and a slide in commodity prices.

Building materials giant and index heavyweight CRH fell 1.1 per cent to €30.40 on generally poor sentiment towards its sector in Europe.

Dealers said that it sometimes took time for the impact of ratings news to feed through to the markets.

Bookmaker Paddy Power Betfair ticked up 0.22 per cent to €93 despite rival William Hill taking a hit in London.

Mike Ashley’s Sports Direct plunged 7.13 per cent to 405 pence after reporting a 73 per cent decline in profits, mainly due an £85.4 million loss on its investment in department store Debenhams.

Sports Direct owns 29.7 per cent of Debenhams, whose own shares tumbled 12 per cent this week on reports that it had lost credit insurance, reigniting fears that the chain may not be able to survive a tough market for British retailers.

Sky’s shares were down 22.5p or 1.49 per cent to 1,508.5p by the close when it emerged Comcast was scrapping its plans to bid for Rupert Murdoch’s 21st Century Fox assets, and would focus solely on a £26 billion takeover of UK broadcaster Sky.

Royal Mail shares edged up 1.1p to 468.6p after shareholders voted against pay for its new Zurich-based boss.

Energy group SSE, owner of Airtricity, blamed the heatwave and soaring wholesale gas prices for an earnings hit of around £80 million, knocking shares by 32.5p to 1,352p.

Online retailer AO World posted a bump in sales, but warned demand had fallen heading into the summer. AO World delivered UK revenue growth of 8.0 per cent in the period from April 1st to June 30th.

In Europe, sales were up 46.2 per cent in constant currencies. Shares edged down 0.4p to 144p. Moneysupermarket. com shares closed 19.1p higher at 328.4p as it unveiled plans for a mortgage comparison site, in a joint venture with HD Decisions.

Topping the STOXX was French telecoms firm Iliad, up 7.4 per cent on news the company had reached one million subscribers in Italy and would extend its low-cost offer.

Lock maker Dormakaba sank more than 17 per cent, its worst day on record, after a profit warning and postponement of mid-term targets by two years.

US stocks fell on Thursday after a slew of weak quarterly reports dampened hopes of a robust earnings season, with a strengthening dollar and trade tensions also weighing on.

Comcast gained 3 per cent after dropping its pursuit of a group of media assets owned by 21st Century Fox, which fell 1.6 per cent.

Bank of New York Mellon fell 6.13 per cent after saying the loss of two clients will continue to hurt results, while insurer Travelers dropped 3.3 per cent after missing profit estimates due to storm-related losses.

Market optimism was also dented by disappointing earnings reports from eBay, slumping 8.2 per cent, Phillip Morris, falling 4.5 per cent, and American Express, down 2 per cent. Among the bright spots was IBM, which gained 3.4 per cent, after its results topped estimates. – Additional reporting: Reuters