EU trade commissioner flags tariffs on $20bn of US goods 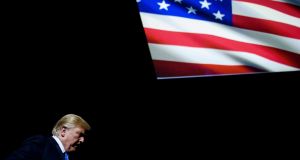 All eyes are on a scheduled meeting between Donald Trump and European Commission president Jean-Claude Juncker. Photograph: Getty

A three-day worldwide stocks rally was threatening to stall on Wednesday, as investors waited for a meeting between US president Donald Trump and the president of the European Commission to see where the global trade war was heading next.

Asian stocks had inched up overnight after Wall Street had hit a five-month high, extending a month-long advance, but tech and commodity stocks Europe eased early on as the market’s focus returned to what may happen with tariffs.

EU trade commissioner Cecilia Malmstrom told a Swedish newspaper on Wednesday that the bloc was preparing to introduce tariffs on $20 billion (€17.09 billion) of US goods if Washington imposes levies on imported cars.

A monthly survey of German business confidence also showed some impact from the row, although there was no major plunge and traders in most markets seemed content to hold positions steady.

The Iseq was ahead by 0.6 per cent around mid-morning on Wednesday.

China’s yuan had eased off a 13-month low which also soothed some nerves, while most major currencies, bond benchmarks and oil were tucked in tight ranges.

“We have seen a lot of complacency over this entire trade war so the question is, unless we see a very negative outcome (from the EU-US meeting), are we going to see a marked reaction?” Rabobank strategist Bas Van Geffen said.

“It is an odd one where two key trade partners, but also two key allies, are now fighting each other.”

With another blizzard of multinational corporate earnings, a European Central Bank meeting and US GDP figures still to come this week, there was plenty of scope for volatility.

The dollar index, which measures the greenback against a basket of six other major currencies, was just off a two-week low at 94.506 and barely budged at $1.1692 against the euro. – Reuters