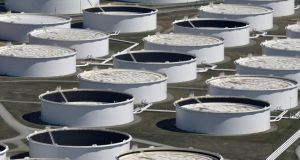 Oil prices rose on Monday on worries over supply after tensions worsened between Iran and the United States, while some offshore workers began a 24-hour strike on three oil and gas platforms in the British North Sea.

The Iranian leadership was responding to the threat of US sanctions after president Donald Trump in May pulled out of a multinational agreement to trade with Tehran in return for its commitment not to develop nuclear weapons.

The Trump administration has launched an offensive of speeches and online communications meant to foment unrest and help pressure Iran to end its nuclear programme and its support of militant groups, US officials said.

The rise also followed news of a 24-hour strike by 40 rig workers on three oil and gas platforms in the British North Sea. The dispute curbed gas flows to shore, but stored crude was expected to mitigate any oil supply disruption.

Limiting supply worries were concerns about the impact on global economic growth and energy demand of the escalating trade dispute between the United States and its trading partners.

Finance ministers and central bank governors from the world’s 20 biggest economies ended a meeting in Buenos Aires over the weekend calling for more dialogue to prevent trade and geopolitical tensions from hurting growth.

“Downside risks over the short and medium term have increased,” the finance leaders said in a statement.

The talks occurred amid escalating rhetoric in a trade dispute between the United States and China, the world’s largest economies, which have already slapped tariffs on $34 billion worth of each other’s goods.

Trump threatened on Friday to impose tariffs on all $500 billion of Chinese exports to the United States unless Beijing agreed major changes to its technology transfer, industrial subsidy and joint venture policies.

Economic and oil demand growth are correlated as expanding economies support fuel consumption for trade and travel, as well as for automobiles. – Reuters