Will Amazon pip Apple to the post to become US’s first trillion-dollar company? 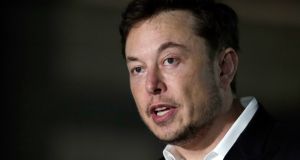 Elon Musk: his paedo slur is further evidence the Tesla founder is a very thin-skinned soul who cannot stand having his judgment questioned. Photograph: Kiichiro Sato/AP

The Tesla founder didn’t take kindly to having his proposed Thai cave rescue plans dismissed by British cave diver Vernon Unsworth, responding by baselessly calling the rescuer a “pedo”. An outcry ensued and Musk eventually apologised, although the half-hearted apology is unlikely to convince investors who have grown increasingly concerned by such erratic behaviour. Musk went down the “he started it!” route, saying his words “were spoken in anger after Mr Unsworth said several untruths”.

What’s especially bizarre is that one of Tesla’s biggest shareholders, Baillie Gifford, had only days earlier implicitly called on Musk to lay off the attacks, saying it “would like peace and execution at this stage”. Musk, who has pilloried journalists, analysts and short sellers in recent weeks, appeared to be listening, telling Bloomberg he had been too combative with his critics on Twitter. “That is my mistake,” he promised. “I will correct it.” Even then, however, he got in a qualifier, saying: “I never launched an attack on anyone who did not attack me first.”

The paedo slur came days later, and is further evidence that Musk is an alarmingly thin-skinned soul who cannot stand having his judgment questioned. This latest farce “crossed a line”, as Loup Ventures analyst Gene Munster wrote in an open letter to Musk, “and it needs to stop”.

Will Amazon win the $1 trillion race?

The race to become America’s first trillion-dollar company is heating up.

For a long time, Apple was the hot favourite, but Amazon is fast catching up, last week breaching the $900 billion level for the first time. With a market capitalisation of some $940 billion, Apple remains in front and analysts reckon it will win the race: almost half the analysts covering the iPhone maker have a price target in excess of $1 trillion, compared to four out of 33 covering Amazon.

Momentum is a powerful force in stock markets, however. Apple is up 13 per cent in 2018, Amazon 55 per cent, resulting in the gap between the two companies shrinking to its smallest level in 12 years. Back then, both firms were relative minnows, with Amazon valued at a mere $13 billion. Now, they’re out on their own as they approach the $1 trillion level.

The obvious potential near-term catalyst is a blockbuster earnings report. Amazon reports this Thursday; Apple does likewise next week.

Contrarians who like to buy when others are fearful will be cheered by the latest Merrill Lynch monthly fund manager survey, which reveals global investors are becoming increasingly bearish.

The survey shows cash levels remain elevated and allocations to global equities have fallen to their lowest levels since November 2016. The percentage predicting faster global growth over the next year has fallen to its lowest level since February 2016. Some 60 per cent say a trade war is the biggest tail risk to markets; not since the European debt crisis of 2012 have fund managers been so worried by one issue.

Overall, the current level of fear is relatively muted. 2018’s global equity correction “has not made them outright bearish by most measures”, notes Fat Pitch blogger and sentiment expert Urban Carmel. However, it’s worth remembering just how much things have changed this year. At the start of 2018, cash levels were at four-year lows and global equity allocations at three-year highs, says Carmel, who pointed out at the time that this lopsided positioning was a headwind to further gains. That headwind is gone. Instead, global economic expectations have “fallen hard” and a majority expect global profits to deteriorate. This same combination of negative profit expectations and dwindling economic confidence was evident in mid-2010, late-2011 and mid-2012, says Carmel, each of which marked market bottoms.

However, the US is now at increased risk of underperformance. The US was out of favour for 17 months, during which time it outperformed global markets. Now, fund managers are overweighting the US. “It’s not yet extreme,” says Carmel, “but a big tailwind behind US outperformance is now gone.”

Momentum remains with the FAANGs

Last Tuesday was a nervy day for Netflix shareholders, with the stock briefly plunging 14 per cent after reporting disappointing subscriber numbers.

Nevertheless, the FAANGs – Facebook, Amazon, Apple, Netflix and Google – remain loved by momentum traders. By the end of the trading day, Netflix had recovered most of its losses while three of the other four names had hit all-time highs. Add Microsoft to the list and you get a six-member FAANMG sector that would be larger than of the 11 official S&P 500 sectors, notes Bianco Research, accounting for 17 per cent of the S&P 500.

The five biggest tech giants are now worth almost $5.1 trillion, notes Rithotz Wealth Management’s Michael Batnick – roughly as much as the market capitalisation of the smallest 282 S&P 500 companies.