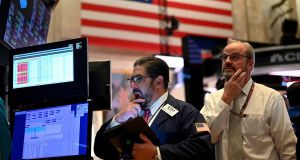 Traders work during the closing bell at the New York Stock Exchange (NYSE) at Wall Street in New York City.

London’s FTSE 100 retreated on Friday as concerns over rising Covid-19 infections hit mining stocks and a stronger pound pressured exporters, although the index looked set to post its best weekly gain since April on hopes of an effective vaccine.

The commodity-heavy index fell 0.1 per cent, with energy and mining tracking lower oil and metal prices.

Both indexes are set for their second straight weekly gains, aided by new local stimulus measures and as US drugmaker Pfizer said on Monday its Covid-19 vaccine was 90 per cent effective.

“Markets have just run out of steam as we’re now out of the initial hubbub of the US election and on the other side of this vaccine news,” said Connor Campbell, a financial analyst at Spreadex in London.

US president-elect Joe Biden cemented his electoral victory by capturing the battleground state of Arizona late on Thursday, but the transition to his administration remains in political stasis as president Donald Trump refuses to accept defeat.

Meanwhile, a day after UK reported 33,470 new cases of Covid-19, its highest daily total to date, British transport minister said he would be making an announcement on changes to the country’s 14-day quarantine rule for travellers “very soon”.

In company news, Premier Inn-owner Whitbread rose 1.1 per cent after Barclays upgraded the stock to “overweight”, while Rolls-Royce jumped 5.6 per cent after JP Morgan raised its target price on the stock.

Construction firm Galliford Try Holdings surged 15.3 per cent after forecasting a return to profitability in the first half of this financial year. – Reuters