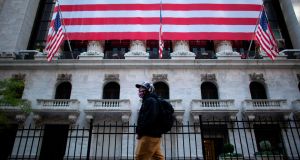 European shares closed higher after a choppy start to the day’s trading, influenced by the closeness of the US presidential race between Democratic candidate Joe Biden and the Republican incumbent Donald Trump.

Stocks had earlier sunk amid fears of an impasse in Washington as Trump jumped the gun in declaring victory.

The Iseq ended 0.7 per cent higher on a relatively busy day for local corporate news. CPL Resources rocketed after the recruitment company agreed to be taken over by Japanese group Outsourcing for almost €318 million in cash. The stock closed at €11.10, up 34.6 per cent.

Smurfit Kappa was 3.4 per cent higher on €35.60 after the packaging giant reported better-than-expected earnings for the third quarter and said it planned make a second interim dividend.

Kerry rose 2.4 per cent to €107.50 after it said its business saw a strong recovery in the third quarter. The food group also reinstated its full-year earnings guidance.

But these gains were partly offset by weakness in CRH, with the cement-maker closing down 5.2 per cent at €31.27 after a volatile session.

Marks & Spencer surged almost 5 per cent after the retailer reported an encouraging performance in its food business alongside the first loss in its 94-year history as a publicly listed company. Online grocery company Ocado soared 5.4 per cent after M&S signalled that their partnership had started well.

Aer Lingus owner International Consolidated Airlines Group (IAG) was among the climbers, rising 2.9 per cent on a good day for airlines, a performance matched by EasyJet.

Sterling retreated against the dollar and the euro, providing support to FTSE 100 exporters including British American Tobacco, which added 3.5 per cent, and Diageo, which rose 3.6 per cent.

European markets had gained earlier this week on anticipation a Biden win would bring better trade ties with Washington and a bigger fiscal package for the US economy.

Wind turbine makers Vestas and Siemens Gamesa, which were expected to benefit from Biden’s clean energy plan, fell 3.5 per cent and 1.6 per cent respectively, as investors reversed the pricing in of a “blue wave”.

Technology stocks pushed Wall Street indices sharply higher on in early trading on Wednesday as the initial vote count pointed to a close race for the White House, although investors remained worried about the prospect of a contested result.

Facebook added 8 per cent and Amazon. com 5.5 per cent, while there were strong gains too for Google’s parent Alphabet, which was up 5.9 per cent, and Microsoft, up 5.4 per cent. Apple traded 4.2 per cent higher.

There were even bigger gains for Uber and Lyft after voters in the state of California approved a ballot measure allowing them to maintain the status of drivers as independent contractors. Uber rose 11.8 per cent, having earlier risen as much as 16 per cent, while Lyft soared as much as 18 per cent before paring gains to about 8.6 per cent. – Additional reporting: Reuters