Iseq index closes up 0.6% in Dublin on last day of trading week 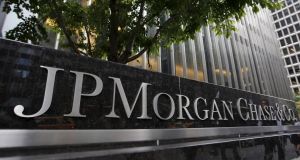 Strong results for JPMorgan lifted financial stocks in the US on Friday. Photograph: Mike Segar/Reuters

The UK’s top share index held on to record highs on the last day of the trading week. In Dublin the Iseq overall index edged up 0.58 per cent.

Meanwhile, in the US a strong update by the biggest US lender by assets, JPMorgan, lifted financial stocks, while robust retail sales data helped Amazon provide the biggest boost to the S&P and the Nasdaq.

On the wider Iseq overall index, the biggest gainer was Independent News and Media, which ended up by 8.7 per cent on almost 4 million shares traded. The stock is trading at 10 cent a share.

Despite a strong update from housebuilder Bovis Homes in the UK, the biggest loser on the Iseq on Friday was Cairn Homes, which fell in Dublin by 4.75 per cent to €1.886.

Meanwhile, European airlines had a relatively strong day, with Ryanair heading back to the €16 territory after its drop last month. The stock closed up 1.24 per cent at €15.95.

Food group Aryzta announced a new appointment at its troubled US unit, and while the stock barely traded in Ireland it fell by 1.61 per cent on its Swiss listing.

Britain’s top share index held onto record high levels on Friday, supported by a sharp rise in British engineering group GKN, which said it had rejected an unsolicited offer from rival Melrose. The FTSE 100 benchmark was up 0.2 per cent at its close, with GKN up 26.2 per cent as it said no to Melrose’s offer and set out plans to split its business in half. Shares in Melrose were up by nearly 6 per cent on the news.

Meanwhile shares in housebuilder Bovis, which is undergoing a turnaround after seeing off two failed takeover bids last year, rose 1.4 per cent after saying it was on track to deliver a significant increase in profit in 2018.

Troubled building and services group Carillion plummeted 29 per cent after a report that the company has put administrators on standby in case talks to rescue the debt-laden group fail.

Kering briefly hit a record high after the French luxury goods group announced plans to spin off German sports brand Puma to its shareholders to focus squarely on its more upmarket brands. Puma fell nearly 6 per cent, while Kering gained just 0.1 per cent.

Autos were the biggest sectoral gainer, up 1.2 per cent, boosted by GKN.

The biggest US lender by assets said the new tax law would help future profits by not only reducing the amount it pays the federal government but also by stimulating more business.

Amazon rose almost 2 per cent, and provided the biggest boost to the S&P and the Nasdaq.

Among other stocks, Facebook fell after the company started changing the way it filters posts and videos on News Feed.

Advanced Micro Devices also fell after the chipmaker said its microprocessors were prone to both variants of the Spectre security flaw days after saying its risk for one of them was “near zero”. – Additional reporting: Reuters