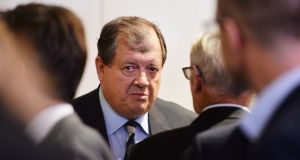 You’ve got to hand it to Paul Coulson and how he can play international debt markets.

The Dublin financier’s glass and metal containers group, Ardagh, has raised almost $10 billion (€8.3 billion) selling “junk bonds” in six deals in the past two years – making him by far the biggest Irish player in global capital markets in recent times.

The money was used mainly to replace existing borrowings with lower-cost debt, as unprecedented central bank stimulus programmes sent market interest rates, or yields, down to record lows. It also helped fund the $3.2 billion purchase in 2016 of a beverage cans maker from US rival Ball and the UK’s Rexam as they pursued their own merger. (That deal, remember, confounded sceptics who thought at the time that bond investors might begin to run out of patience with the already highly-indebted Ardagh.)

However, Coulson, known to friends as “the Cooler” since his university days in the early 1970s, ventured into the riskiest area of the bond markets this week, raising $350 million through the sale of esoteric instruments called payment-in-kind (PIK) notes.

The businessman is positioned to benefit to the tune of almost $124 million as the net $344 million proceeds from the deal are to be used to “provide liquidity” to shareholders. That’s corporate speak for special dividends or a share buyback.

The latest windfall will bring to about €825 million the amount returned within seven years to investors, financed through the sale of high-cost debt. The main beneficiary has been Coulson – who owns about 36 per cent of the parent company of the maker of bottles and cans for the likes of Coca-Cola, Heineken, L’Oréal and John West.

You can understand why investors snapped up the PIK notes, which typically pay nearly twice the interest of your average junk-rated bond (what’s deemed by credit ratings agencies to be below investment grade). Ardagh didn’t disappoint, pricing its notes on Thursday to carry an interest rate of 8.75 per cent.

There’s good reason for the higher rates. Interest on PIKs isn’t paid out at regular intervals, but accumulated and handed over at the same times as the principal is due. Global investors, desperate for yield these days, are not even looking for regular cash income.

The bonds – together with $1.56 billion of so-called toggle notes issued in 2016 – were sold by holding companies within the group. These companies rank above the publicly-listed Ardagh Group, the operating company that actually makes and sells the glass and metal containers and which floated on the New York Stock Exchange last March as part of Coulson’s plan to cut its debt burden. (Coulson owns 33 per cent of the operating company.)

Standard & Poor’s, one of the world’s leading bond-rating firms, characterised the deal as “aggressive” and contrary to the group’s stated intention to cut borrowings. Still, it indicated that the amount hardly moves the dial when you consider that the overall group’s total borrowings stood at €9.4 billion of debt at the end of September.

Ardagh is fast approaching €8 billion in annual sales as a series of debt-funded deals carried out by Coulson over the past two decades transformed what was once the Irish Glass Bottle Company (no longer with us) into one of the world’s biggest packaging groups.

The latest trip to the debt markets follows Ardagh scaling back its full-year earnings forecast in October for a second time in three months, amid weakness in the dollar and US beer market. It currently expects to turn in €1.34 billion of earnings before interest, tax, depreciation and amortisation for 2017.

While the operating company is not technically liable for the new bonds, it is the only part of the business that makes money. Therefore it ultimately shoulders the burden. This will most likely be met by sending cash up the chain as a result of dividends from cash generated by the business, taking on more debt at operating level, or a share sale in the market.

Coulson, in fairness, managed to navigate jittery US bond markets this week to raise the debt. The yield on 10-year US government bonds spiked to their highest level in almost a year, at 2.65 per cent, amid speculation that the Chinese and Japanese central banks may be scaling back their US purchases.

While US yields subsequently came back in the as China denied the chatter, European bonds were sold off on Thursday as minutes from the European Central Bank’s December meeting added to signs that the bank may accelerate the phasing out of its stimulus programme.

It all was enough to prompt one of the most revered names in financial markets, Bill Gross of Janus Henderson, to channel his inner Oprah Winfrey, signalling in his latest investment outlook that the “time is up” for a three-decade bull run in bond markets.

Referencing how Winfrey promised during a Golden Globes speech last weekend that “a new day is on the horizon” for women, Gross wrote on Thursday: “Bonds, like men, are in a bear market.”

There is little doubt that when the time comes for Coulson to refinance the debt issued this week to finance a shareholder bonanza, he’ll be dipping his toe into icier waters.