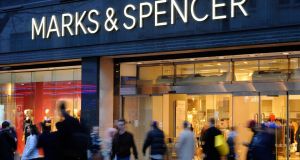 The FTSE 100 touched a fresh record and ended 0.2 per cent higher, despite falls for UK retailers Tesco and Marks & Spencer after their Christmas trading updates disappointed.

European shares dipped on Thursday as a bond market sell-off and a stronger euro took the steam out of the breakneck New Year rally in equities. Results drove the bulk of stock moves, with disappointments from retailers Tesco and Marks & Spencer weighing heavily.

The Iseq fell 0.9 per cent as a climb for Ryanair was more than offset by weakness in food group Kerry and a fall for building materials group CRH.

Ryanair rose 1.65 per cent to €15.76, as the stock continued its recovery following the flight-cancellation and pilot-rostering issues that emerged in September. Although it remains below its mid-2017 trading level, investors appear confident that the airline’s business model remains intact.

CRH dropped 1.8 per cent to €30.46, while Kerry fell 2.4 per cent to €86.60 as food stocks – seen as a defensive play – faded from highs of last year. There was strength in financial stocks across Europe, with Bank of Ireland adding 0.7 per cent to €7.88, while housebuilders Cairn Homes and Glenveagh added 2.1 per cent and 0.8 per cent respectively.

The FTSE 100 touched a fresh record and ended 0.2 per cent higher, despite falls for UK retailers Tesco and Marks & Spencer after their Christmas trading updates disappointed.

Marks & Spencer shares sank 7 per cent, the biggest loss on the FTSE, after sales fell in the last quarter of 2017, hampering the retailer’s latest attempt at a corporate turnaround. Tesco fell 4.5 per cent as the country’s biggest retailer missed forecasts for Christmas trading as lower demand for general goods offset strong sales of fresh food.

Sainsbury’s, Britain’s second-largest supermarket, and fourth-ranked Morrisons both beat forecasts for Christmas trading but fell 2.1 per cent and 1.4 per cent respectively. Mid-cap retailer Card Factory slumped 20 per cent after its Christmas update.

Grafton Group, the owner of Woodies DIY group, rose 6.6 per cent after it said its revenues had increased 7 per cent on the back of strong merchanting business in Ireland and the Netherlands.

Stronger metal prices pushed up big mining companies, including Anglo American, Rio Tinto and BHP Billiton, while among the gainers, Just Eat led with a rise of 4.7 per cent, underpinned by a Barclays upgrade to “overweight” on expectations of strong revenue momentum.

Europe’s retail sector fell 1.3 per cent, while bank stocks, which had jumped on Wednesday as bond yields surged, extended gains to end 0.4 per cent higher.

Danish jewellery firm Pandora dropped nearly 11 per cent after the company said it expected profit margins to fall in the next few years and reported 2017 revenue below expectations.

Sweden-headquartered technology group Hexagon jumped up 5.8 per cent after its chief executive was cleared of insider trading charges. While it is too early in the season to fully determine what impact results are having, investors said earnings would be under particular scrutiny this year as the market hoped for another year of earnings growth.

Brent crude rose above $70 a barrel and US crude rose 1.57 per cent to $64.58 per barrel, its highest since December 2014, boosted by a surprise drop in US production and lower crude inventories.

Chevron rose 3.2 per cent and Exxon 1.5 per cent, helping the S&P energy index gain 2.24 per cent and putting it on track for its best percentage gain in more than seven months. Delta Air Lines rose about 2 per cent after reporting upbeat quarterly profit as well as forecast, helped by higher business fares in a busy holiday season. – (Additional reporting: Reuters)

1 Policy failed us during the banking crisis and it’s failing us again
2 ‘Brexit readiness’ tool launched for Irish business amid trade talks impasse
3 Cliff Taylor: Jobs in the firing line as the country moves to Level 5
4 No-deal Brexit could trigger rise in food prices, says Simon Coveney
5 Retailers accused of ‘stealing business’ from rivals by flouting restrictions
6 Aryzta to pursue asset sales as takeover talks fail
7 How long can Government afford to keep State pension age at 66?
8 In praise of Gogglebox Ireland, an essential service in all but name
9 Goldman Sachs in talks to take over Blanchardstown shopping centre
10 Budget 2021: fuel prices rise and high-emission cars hit
Real news has value SUBSCRIBE