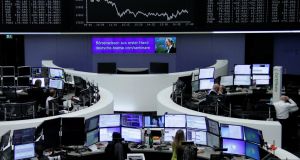 DAX board at the stock exchange in Frankfurt, January 10th, 2018. Photograph: Reuters

Global bond yields rose after Bloomberg reported that Chinese officials were said to be wary of American government debt, further roiling a bond market unnerved by a recent sell-off. This drove financial stocks across Europe higher and kept markets on winning run. Reduced asset purchases by the world’s top central banks, rising commodity prices and looming US debt sales all support the case for higher bond yields, but until now they have proved resilient.

The Iseq underperformed its European peers, falling 76 points to 7,102 as gains in financials on foot of rising bond yields were offset by moves against big food groups such as Kerry and Glanbia.

Bookmaker Paddypower Betfair, meanwhile, was down nearly 4 per cent at €96.40 after Cormac Barry exited as head of the group’s Australian arm.

A rise in banks and oil stocks boosted the UK’s top share index to a fresh record on Wednesday as climbing bond yields supported financials across Europe. Britain’s blue chip FTSE 100 index was up 0.2 per cent at 7,748.51 points, a new closing record and outperforming the broader European market, while mid-caps declined 0.6 per cent.

British banks joined in a rally with European peers as bond yields rose. The gains in financials added 37 points to the FTSE. Royal Bank of Scotland led the FTSE 100, up 4.6 per cent after Morgan Stanley upgraded its rating on the stock to “overweight”. Morgan Stanley said RBS was the most resilient UK bank in an uncertain outlook. RBS peers HSBC and Standard Chartered also gained 3.7 and 3.3 per cent as banks across the region rallied, with the pan-European banks index at a two-year high thanks to rising bond yields.

Wednesday was another day dominated by Christmas updates from retailers, with shares in grocer Sainsbury’s advancing 1.9 per cent after it beat forecasts slightly in its Christmas trading update. Elsewhere a warning from the UK’s Financial Conduct Authority (FCA) put pressure on shares in spreadbetters, with IG Group dropping 4.4 per cent, Plus500 down 5.5 per cent and CMC Markets down 2.3 per cent. The FCA said its review of the industry found “areas of serious concern” in Britain’s contracts for differences (CFDs) market.

Bond market jitters have weighed on the broader stock market, leaving rate-sensitive European banks, up 2.1 per cent,as the only clear sectoral winner on the day, while bond proxies like utilities and real estate suffered the most. Overall the Pan European STOXX 600 index fell just 0.4 per cent after hitting a fresh two-and-a-half year year high. Monte dei Paschi di Siena shares rose by as much as 6.7 per cent on Wednesday, leading other banking stocks higher after data confirmed a slow fall in Italian lenders’ bad debts.

Wall Street’s major indexes fell on Wednesday, stalling the rally that marked the start of 2018, after a report that China is considering slowing its purchases of US government debt. Bank stocks were largely favoured as US Treasury yields jumped to 10-month highs after Bloomberg reported the US bond market was becoming less attractive for Beijing, one of the largest foreign holders of US government debt.

Banking stocks Wells Fargo and JPMorgan rose about 0.8 per cent each. Berkshire Hathaway rose 0.7 per cent after the conglomerate promoted two of its top executives, cementing their status as the most likely successors to Warren Buffett. Nine of the 11 major S&P sectors were lower, led by a 1.6 per cent fall in interest-rate sensitive real estate and 0.8 per cent drop in utilities. However, the Dow Jones Transport index, an indicator of economic activity, rose 0.6 per cent, boosted by airline stocks. Number two US homebuilder Lennar Corp fell 0.12 per cent after its profit missed estimates due to a delay in the booking of a single large transaction. Nordstrom was down about 7 per cent after the retailer reported holiday period same-store sales.

1 I want to change my will quickly in case I fall ill. Do I need a lawyer?
2 Coronavirus: Property rental in the jaws of the epidemic
3 WhatsApp limits message forwarding to slow spread of misinformation
4 Collison brothers worth an estimated €2.9bn each
5 Coronavirus: Aldi eases restrictions on purchasing products
6 Cold water poured on idea of ‘helicopter money’
7 Irish back pain medical device group to pull stock market listings
8 NTMA raises €6bn from bond auction to help State meet Covid-19 costs
9 Coronavirus will be cinema’s biggest villain for some time yet
10 Medtronic aiming to make 1,000 ventilators a week in Galway by June
Real news has value SUBSCRIBE