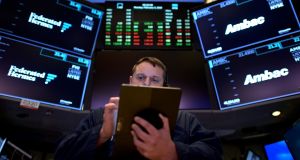 New York Stock Exchange. US stocks were in demand in early afternoon trade as gains in Amazon and Nike helped markets attempt a recovery. Photograph: Johannes Eisele/AFP via Getty Images

Dublin’s Iseq index pushed higher on Monday as Ryanair shares gained altitude on the back of a strong set of quarterly figures, with the wider European market enjoying a rally from losses sustained last week amid fears over the economic fallout from a virus outbreak in China.

Ryanair, the third biggest company on the Iseq, stormed 5.8 per cent ahead to €15.77 as analysts went about upgrading their earnings forecasts for the carrier after it reported better-than-expected quarterly earnings.

The company’s chief executive, Michael O’Leary, also sought to downplay the impact of the coronavirus that has emanated from China. “Our experience of the Sars and the avian bird flu five, six years ago, was that actually it was mildly good for the short-haul business here in Europe, ” he said.

Bank of Ireland, whose shares were sold off late last week amid fears over the state of Ireland’s commercial property market, rallied by 1.7 per cent to €4.49, while Permanent TSB inched 0.1 per cent higher.

London’s FTSE 100 index gained 0.6 per cent, bouncing back from a seven-week low, as strong US economic data kept in check worries about the coronavirus, but gains for UK-focused midcaps were limited by concerns about the possibility of Britain having no trade deal in place with the EU by the end of the year.

With the European Union and Britain tussling over a post-Brexit deal on Monday ahead of talks scheduled for March, sterling weakened as investors grew nervous about the viability of a smooth trade deal between the two post-divorce.

Easyjet gained on the back of strong earnings from rival Ryanair.

Among midcaps, Future gained 4.1 per cent after the publisher forecast its full-year results to be materially ahead of market expectations. Small-cap peer Reach also rose more than 6 per cent.

A notable loser was payments firm Finablr, which gave up almost 8 per cent. Its unit Travelex said on Friday it had partially restored its UK website, more than a month after a crippling ransomware attack.

Brokerage EFG Hermes also downgraded Finablr, which has lost more than half its value since the attack in December

Oil and gas stocks were the worst performers for the day as worries over demand in China continued to erode oil prices.

German medical technology firm Siemens Healthineers was among the worst performers on the STOXX 600 after it reported disappointing first-quarter results.

US stocks were in demand in early afternoon trade as gains in Amazon and Nike as well as a surprise rebound in US factory activity helped markets attempt a recovery from steep weekly losses due to concerns about the coronavirus epidemic.

ISM data showed the manufacturing sector expanded in January after five straight months of contraction, indicating that a prolonged slump in business investment has probably bottomed out.

Shares of Nike rose after JP Morgan added the footwear maker to its focus list and provided the biggest boost to the Dow Industrials.

Gilead Sciences gained after the drugmaker said it has provided its experimental Ebola therapy for use in a small number of patients affected by the coronavirus in China.

Tesla jumped as Japan’s Panasonic posted its first ever quarterly profit in its US battery business with the electric-car maker.