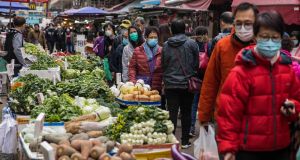 People wearing masks visit a fresh food market in Hong Kong as a preventative measure after a virus outbreak which began in the Chinese city of Wuhan. Photograph: AFP

Hong Kong’s stock market tumbled almost 3 per cent on Wednesday in the first trading session since the spread of coronavirus widened over the Lunar New Year holidays while several foreign companies active in China announced plans to curb trading.

The Hong Kong index hit a seven-week low with shares of China-exposed stocks, financials and the travel and tourism sectors leading declines as fears about a potential pandemic of the virus, which originated late last year in Wuhan in central China, intensified.

Elsewhere, Starbucks closed more than half of its coffee shops in mainland China – about 2,000 of them – and Toyota said it was halting production in the country.

British Airways suspended all direct flights to and from mainland China due to the outbreak. “We apologise to customers for the inconvenience, but the safety of our customers and crew is always our priority,” BA said in an emailed statement on Wednesday.

Sweden’s IKEA, the world’s biggest furniture retailer, said it was temporarily closing about half of its 30 stores in China “in response to the Chinese government’s call for efficient control of the spread of the disease”.

Wuhan, the epicentre of the coronavirus, is a manufacturing, shipping and business hub. Apple is working with its suppliers in the city to mitigate any production loss, but the impact outside of the region is less clear, chief executive Tim Cook said.

Apple warned on Tuesday about the potential impact of the outbreak on its supply chain, widening its guidance on revenue to take the uncertainty into account.

The motor industry, which has plants scattered across the region, has also been particularly affected. Japan’s Toyota and South Korea’s Hyundai are among carmakers to have kept their plants shut. Japanese groups Honda and Nissan have started flying out their non-Chinese workers, as have French groups PSA and Renault.

As the virus has spread in China and beyond despite travel restrictions and other worldwide efforts to contain the disease, airlines suspended flights and chains including McDonald’s and KFC have shut locations. Volkswagen, Canadian insurer Sun Life Financial and banks from Credit Suisse to Morgan Stanley are telling staff to work from home.

China’s stock, currency and bond markets have all been closed since January 23rd for the Lunar New Year celebrations. They are scheduled to reopen on February 3rd.

Fears of the spreading coronavirus have knocked global stock markets over the past week. Transport, tourism, retail and luxury stocks have been at the frontline.

Sean Darby, global equity strategist at Jefferies in Hong Kong, said the early Hang Seng reaction on Wednesday had been “very benign” and the index may have further to fall.

“They might be disappointed later on, because I suspect the maximum pain might be some time early next week once the authorities have realised that Hubei is like a massive warehouse for China,” he said, referring to the province where Wuhan is the capital city.

“Whilst you might not have lost any production, the fact is that the supply chain has got broken.”

China’s national health commission said on Wednesday the national death toll from the virus outbreak had risen to 132 with 5,974 confirmed cases.

With China on holiday, investors have been selling the Australian and New Zealand dollars as a proxy for the yuan. They have also been buying Antipodean sovereign bonds and US treasury debt on wagers central banks globally might have to ease policy to offset the economic drag from the virus.