Sterling on course for biggest slump in seven weeks 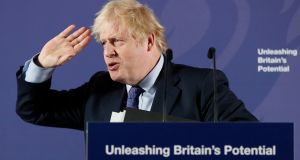 The pound headed for the biggest slump in seven weeks as clashing statements from the UK and the European Union fuelled fears that talks between the two sides on a future trade deal will be fraught.

Sterling fell more than 1 per cent to lead losses among group-of-10 currencies, wiping out last week’s advance. EU chief negotiator Michel Barnier said in Brussels that a “highly ambitious” trade deal is on offer for the UK - but only if London agrees to its rules. Speaking minutes later in London, UK prime minister Boris Johnson rejected the demand and insisted Britain will thrive even if negotiations fail.

The pound’s drop marks a turnaround from the UK’s formal exit of the EU on Friday, when the currency completed its best week since mid-December after the Bank of England kept interest rates unchanged Thursday. While Britain is now in a transitional phase without rule changes, it could still be heading for an economically messy divorce if a trade agreement can’t be reached by the end of 2020.

“The UK government wants to pursue a harder Brexit trading relationship to allow more room for policy divergence with the EU which is seen as one of the key benefits of Brexit,” said Lee Hardman, a foreign-exchange strategist at MUFG Bank. “It continues to pose downside risks for the pound in the year ahead.”

The challenges the UK and the EU face in striking a trade deal this year aren’t exactly news to traders. Nonetheless, short-term positioning remains sensitive to headlines that suggest the two sides are in for a clash. – Bloomberg