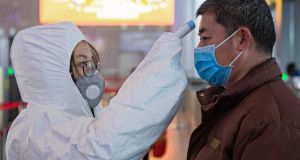 Stocks markets tumbled worldwide on Monday and investors worried about the possible economic impact of the coronavirus drove up the price of safe-haven assets such as the Japanese yen and government debt.

China’s yuan tumbled to a 2020 low and commodity-linked currencies such as the Australian dollar fell on mounting concern about the coronavirus. The yen was the main beneficiary, though its move higher was limited.

Crude prices dropped below $60 a barrel for the first time in nearly three months on risk aversion, while gold prices surged 1 per cent to nearly a three-week high.

Benchmark USTreasury yields fell to three-month lows while the yield on 10-year German bunds, the euro zone benchmark, fell to its lowest in almost two months.

Key indexes for British, French and German equity markets slid more than 2 per cent, as did pan-European markets. Stocks on Wall Street fell more than 1 per cent as investors grew increasingly anxious.

MSCI’s gauge of stocks across the globe fell to a three-week low, while its emerging market index lost 1.59 per cent.

US equities were overdue for a correction, said David Kelly, chief global strategist at JPMorgan Funds in New York. “We have a slow and steady economy, a giddy and fast market and eventually those two things have to meet in the middle somewhere.”

China extended its Lunar New Year holiday and the Shanghai stock exchange said it will reopen February 3rd. More big businesses in China shut down and told staff to work from home in a bid to contain the disease’s spread as the death toll rose to 81.

The Nikkei share average in Tokyo slumped 2.03 per cent, its biggest percentage fall since August, with tourism shares hard hit.

The ability of the coronavirus to spread is getting stronger and infections could continue to rise, China’s National Health Commission said on Sunday. The total number of confirmed cases in China rose to 2,835.

Robert Pavlik, chief investment strategist at SlateStone Wealth in New York said investors are scared that the virus could lead to an economic slowdown but at the moment the market has overreacted.

“The market has been waiting for some sort of sell-off to develop after a roughly 30% year and for a reason for it to happen,” Mr Pavlik said.