US and European stocks recover after coronavirus dent 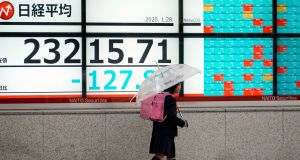 Stock markets across Asia remained under pressure with the rising death toll in China from a rapidly spreading virus denting investor confidence.

US stocks bounced back a day after suffering their deepest losses in nearly four months, as investors were put at ease by signs of US economic resilience and efforts to contain the rapidly spreading coronavirus.

Wall Street’s S&P 500 rallied 1 per cent on Tuesday led by shares in technology and financial companies, recovering a large chunk of the prior day’s 1.6 per cent slide. The tech-heavy Nasdaq Composite was up 1.1 per cent, with Apple up over 2 per cent ahead of its quarterly earnings report. The Dow Jones Industrial Average was up 0.7 per cent.

American consumers grew more confident this month than economists anticipated, according to a survey from The Conference Board. Optimism over the labour market supported consumer confidence and will prevent the economy from slowing in early 2020, said Lynn Franco, senior director of economic indicators at the group.

Data showing that US orders for long-lasting goods rebounded in December also brightened the mood, even though new orders for non-defence capital goods excluding aircraft - considered a gauge of business investment - fell.

Across the Atlantic, the composite Stoxx Europe, which tracks the continent’s 600 largest listed companies, rose 0.4 per cent on Tuesday. A day earlier it fell 2.3 per cent, its worst one-day loss since early October on heightening concerns over the coronavirus outbreak.

During a meeting with the head of the World Health Organisation, Chinese president Xi Jinping said the country would defeat the “devil” coronavirus and share information about the outbreak in a transparent manner, according to state media.

“The belief that low rates can and will smooth over in the deepest potholes in the road ahead for financial markets is deeply ingrained,” said Kit Juckes, a strategist at Société Générale. “But there will be an economic impact from the virus outbreak, even if we don’t yet know how long it will last and therefore how big the economic hit will be.”

The death toll from the coronavirus outbreak has risen to more than 100, and the number of people infected jumped by almost half. Hong Kong has said it will close its high-speed rail link and halve the number of flights with mainland China, as it seeks to isolate itself from the disease.

Asian shares tumbled on Tuesday as they caught up with stocks elsewhere. Markets had been mostly closed on Monday for a regional holiday. Shares in South Korea, Singapore and Australia all fell.

“Should the incidence of infections escalate, it could also have economic consequences, as the Sars epidemic of 2003 demonstrated,” said Atsi Sheth, a managing director at Moody’s. “The fear of contagion could dampen consumer demand, and affect tourism, travel, trade and services in affected countries.”

Hong Kong’s stock exchange will reopen on Wednesday while markets in mainland China do not return from the lunar new year holiday until Monday. Shanghai has ordered companies not to reopen until February 9.

In a statement published on Tuesday, China’s securities regulator instructed securities and futures traders to “actively guide investors to rationally, objectively analyse the impact of the outbreak and adhere to the concepts of long-term and value investment”.

The weakness across many of the region’s markets came as Chinese state media confirmed the death toll from the pathogen had risen to more than 100. Most of the dead were in Wuhan and the surrounding province of Hubei, the outbreak’s epicentre.

Seoul’s benchmark Kospi index closed down 3.1 per cent, with stocks that are exposed to a probable fall in spending by Chinese tourists as a result of the virus among the hardest hit. AmorePacific, South Korea’s largest cosmetics company, dropped 8.5 per cent while duty-free chain Hotel Shilla tumbled almost 10 per cent. Smartphone and chip manufacturer Samsung fell more than 3 per cent.

In Sydney the S&P/ASX 200 index slipped 1.8 per cent as energy and mining stocks sold off on concerns over the pathogen’s impact on Chinese demand. Commodities-focused companies fell in Tokyo, too, where the Topix shed 0.6 per cent. Singapore’s FTSE Straits Times dropped 1.9 per cent.

The yield on the 10-year US Treasury rose 3.9 basis point as investors moved out of the relative safety of government debt. Gold was down 0.8 per cent.

Investors in the US were looking ahead to the conclusion on Wednesday of the Federal Reserve’s policy meeting. The central bank is expected to keep interest rates unchanged after three cuts in 2019.

Donald Trump tweeted that “the Fed should get smart & lower the Rate to make our interest competitive with other Countries which pay much lower”.

“There is almost no inflation-this is the time (2 years late)!” the president wrote. – Copyright The Financial Times Limited 2020

10 Central Bank has sold off 72% of IBRC-linked bonds