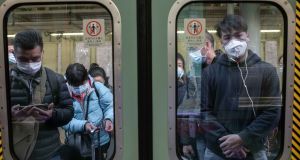 Fears over a spread of the coronavirus weighed on markets. Photograph: Bloomberg

Global stocks fell on Thursday as the coronavirus epidemic raised fears of a further hit to China’s economy, while weak earnings in the US among technology companies and poor results from Shell and BT in the UK added to the gloom.

Gainers were few and far between on the Irish markets on Thursday as the main Iseq all-share index dropped 1.26 per cent with the smaller Iseq 20 index closing with with no gain.

In line with a global sell off of travel and leisure stocks in light of the spreading coronavirus, Dalata Hotel Group led the laggards on the day. The State’s largest hotel group, which owns the Clayton and Maldron brands, slipped 2.32 per cent to €4.64.

Staying in that sphere, budget airline Ryanair fell 1.69 per cent to €14.84 on its Irish listing while its fellow transport stock, Irish Continental Group, shed 1.79 per cent to close at €4.66.

On the wider Iseq all-share index, three stocks closed the day higher although very little in the way of volume traded in these companies on the day.

Other losers in which relatively strong volume was traded were in the financial sector with Bank of Ireland tumbling 1.75 per cent to €4.61 and AIB dipping 1.31 per cent to €2.71. Meanwhile, index heavyweight CRH closed the day 1.38 per cent lower at €34.38.

The FTSE 100 fell by 1.4 per cent to levels not seen since mid-December and the FTSE 250 slid 0.9 per cent, as a modest rebound that the indexes had managed over the last two sessions unravelled.

The biggest drag to the blue-chip bourse came from Shell, which slid 4.4 per cent to its lowest level since July 2017 after fourth-quarter profit halved and the oil major cut the pace of its $25 billion share buyback programme.

Telecom company BT slumped 8 per cent on its worst day in three years after it reported a steeper-than-expected drop in quarterly revenue and said Britain’s decision to limit Huawei’s role in building 5G and fibre networks would bump up costs.

Around midday, travel group Carnival’s UK-listed stock stumbled as much as 11 per cent to a three-low year after news of potential coronavirus infection on one of its cruise ships. Shares ended down 5.1 per cent.

Outperforming the main index was Unilever, which added 2 per cent after the consumer goods company launched a strategic review of its tea business.

Avast dropped 13.5 per cent, bringing weekly losses to about 30 per cent, after saying it would shutter its data analytics business following reports of data privacy concerns.

The pan-European Stoxx 600 ended 1 per cent lower to take losses so far this week to 2 per cent.

Shares of watchmaker Swatch Group slipped 3.9 per cent as it reported a marked drop in annual sales and forecast continuing challenges in its key Hong Kong market this year.

Fashion retailer H&M and truck maker Volvo were the biggest boosts to the Stoxx 600 after reporting upbeat results.

Shares of Facebook dropped 6.4 per cent after the company warned of slowing growth as its business matured and reported a surge in quarterly expenses.

Tesla jumped 10.8 per cent after the maker of electric cars posted a second straight quarterly profit as vehicle deliveries hit a record.

Altria slid 4.8 per cent after the tobacco company said it took another $4 billion charge on its investment in Juul Labs.