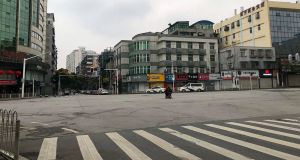 A deserted Wuhan in China, where the coronavirus was first identified.

Global equity markets fell heavily and oil prices slumped after China warned the spread of the deadly coronavirus would accelerate, highlighting concerns about the disease’s potential impact on the world’s second-biggest economy.

China’s leaders are bracing themselves for a blow to first-quarter economic growth as the virus weighs on consumption and travel during the lunar new year and threatens to hit manufacturing.

Beijing confirmed on Monday that 80 people had died while 2,744 were infected. The mayor of Wuhan has said the number of coronavirus cases in the city could rise by another 1,000. The escalating public health crisis prompted the government to extend the lunar new year holiday until next week in an effort to contain the outbreak.

Lee Hardman, a currency analyst at Japanese bank MUFG, said the virus “provides a setback for the global economy and manufacturing sector which had been showing tentative signs of improvement in recent months”.

Major bourses across Europe posted broad declines as the composite Stoxx 600 fell 1.7 per cent and shares in the travel, luxury goods and mining sectors tumbled. London’s FTSE 100 slid 1.6 per cent, while Germany’s Dax was 1.7 per cent lower. US shares were set to open sharply lower on Wall Street, with S&P 500 futures indicating a fall of more than 1.5 per cent.

The financial capital Shanghai has ordered companies not to reopen until February 9th while the manufacturing hub of Suzhou has postponed the return to work of millions of migrant labourers for up to a week. Suzhou is one of the world’s largest manufacturing hubs where companies such as iPhone contractor Foxconn, Johnson & Johnson and Samsung Electronics have factories.

Underscoring concern among policymakers over the economic fallout from the outbreak, China’s banking and insurance regulator announced moves to help businesses affected by the crisis.

The outbreak comes as the country is reporting its lowest rate of economic growth in nearly 30 years. In 2019, the economy grew by just 6.1 per cent. Exports over the past two years have been hurt by the trade war with the US. Consumption, which is now under pressure from the outbreak, has become a far more important source of stable economic growth for the country.

“Everything depends on how rapidly it spreads and how serious it gets, but in principle this could have a serious impact on consumption,” said Michael Pettis, a finance professor at Peking University and senior fellow at Carnegie-Tsinghua Center. “People are not going out to restaurants and bars.”

In Europe equity markets, British Airways owner IAG led declines across the major European airlines, while high-end British fashion label Burberry, which is heavily exposed to the Chinese market, was one of the biggest fallers in Europe as it slipped 5.5 per cent.

“The progress of the coronavirus will be the overwhelming key short-term driver as more and more concerns rise to the surface,” said Jim Reid, a strategist at Deutsche Bank.

Japan’s Topix, one of the only major regional stock indices trading on Monday, fell 1.6 per cent. Markets in China and Hong Kong were shut for the lunar new year. S&P 500 futures were pointing to losses of just over 1 per cent when Wall Street begins trading later in the day, after suffering its worst weekly performance since August.

A rally in sovereign debt gathered pace throughout the day’s trading as investors moved into the relative safety of government bonds. Yields on 10-year US Treasuries, which move in the opposite direction to prices, fell 7 basis points to below 1.6 per cent for the first time since October.

Brent crude, the international benchmark, fell 2.2 per cent to $59.35 a barrel, having earlier fallen more than 3 per cent to its lowest level in almost three months.

Investors responded by piling into havens, with gold rising 0.8 per cent to $1,578 (€1,430) an ounce. Yields on 10-year US Treasuries, which move inversely to prices, fell 5 basis points to 1.6218 per cent, its lowest level since October. Japan’s yen strengthened past ¥109 to the dollar. China’s offshore renminbi exchange rate weakened 0.8 per cent to Rmb6.9820 a dollar.

Iron ore futures, which are tied closely to expectations of China’s economic growth, fell as much as 6.6 per cent to $85 a tonne, while copper fell 1 per cent.

Shares in miners suffered, with Anglo American the worst-performer in Europe with a 4.7 per cent decline. The Russian rouble, which often tracks the price of oil, fell 1 per cent against the dollar.

The drop in oil prices also came despite reports that the US embassy in Iraq had been struck by a rocket attack at the weekend. Saudi Arabia’s energy minister on Sunday sought to play down the coronavirus’s impact on oil demand.