Markets rise on US economic data and trade talks hopes

Irish banks claw back some ground in testing week 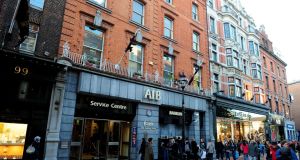 Markets rose on good US economic data and upbeat comments from president Donald Trump on resolving a trade row with China.

Irish banks clawed back some ground on Friday after taking a hammering over several days this week. AIB climbed 3.72 per cent to €2.786, while Bank of Ireland rose 3.45 per cent to €4.26.

Dealers said that no news emanated from either lender. “It was just a reaction to how much they have been sold off during the last few days,” one said.

London-listed betting software developer Playtech fell after cutting earnings, down 3.19 per cent to 397.41p, but dealers said the negative reaction to this news failed to spread beyond that stock.

Insulation and building materials group Kingspan was similarly in demand with buyers, adding 1.63 per cent to €48.78.

Woodies DIY owner and builders’ supplier Grafton added 1.4 per cent to close at 834.5 pence sterling. The Irish company, which is listed in London and owns several British businesses, rose alongside several construction-related stocks which have suffered lately as investors weighed the likely impact of Brexit on the British economy.

Packaging group and Smurfit Kappa competitor Mondi added 2.28 per cent to 1,680p on what was a good day for the sector.

Cuisine de France owner Aryzta shed more than 2 per cent after reporting that revenues at the Irish-Swiss baker fell in three months to October 31st, the first quarter of its financial year.

Shares in the company, which makes burger buns for McDonald’s and supplies bread to supermarkets, fell 2.02 per cent to 1.092 Swiss francs on the Zurich stock market, where most of its stock is traded.

Air France KLM rose 2.2 per cent to €10.44 on a day where airlines were generally popular with investors.

Italian cement maker Buzzi fell 0.35 per cent to €22.70, while its German competitor Heidelberg edged up 0.18 per cent to €67.26. Both performances trailed Irish player CRH.

The S&P 500 and Dow Jones indexes eked out gains on Friday following upbeat trade deal comments from Washington and Beijing, while the Nasdaq was weighed down by a slump in shares of Tesla after the launch of its electric pickup truck.

Economic data underscored a resilient US economy. Manufacturing output accelerated in November to its fastest pace in seven months, and services activity picked up more than expected.

Six of the 11 major S&P 500 sectors were trading higher, led by financials. Limiting gains on the benchmark index was the technology sector, which slipped 0.17 per cent. Intuit dropped 4.6 per cent after the income-tax filing software maker forecast second-quarter profit below estimates.

Among other stocks, Nordstrom jumped 10.4 per cent after the retailer raised its 2019 forecast and reported third-quarter profit above expectations.

1 47,000 homes need to be built each year to solve housing crisis, report says
2 Jervis shopping centre takes major tenants to court over rent disputes
3 How Argentina and its creditors thrashed out a $65bn deal
4 Hairdressing 7% more expensive in July as prices declined across economy
5 Digital pollution: ‘We have a pandemic of data and 90% of it is crap’
6 Seán FitzPatrick makes fresh bid to secure planning for new Greystones home
7 New home completions drop 32% in second quarter
8 Can Covid free your workplace of bureaucracy?
9 Cisco sales warning raises spectre of broad IT spending decline
10 Shed Distillery in Leitrim to open €3m visitor centre next month
Real news has value SUBSCRIBE