Markets report: London is up slightly, while Uniphar is the top performer on the Iseq 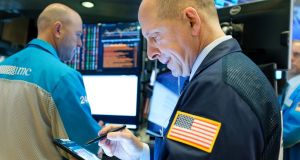 Traders working the floor of the New York Stock Exchange. Heading into Tuesday’s afternoon session, seven of the 11 major S&P 500 sectors were lower

Several European markets reversed course to close lower in a choppy session on Tuesday as lack of clarity on the progress of trade talks between Washington and Beijing kept investors from making bold bets. Markets in London were up slightly, while the Iseq in Dublin was flat.

In the US, the S&P 500 and the Dow Jones indexes retreated from record levels as dour forecasts from Home Depot and Kohl’s eroded confidence that the US consumer will support the economy.

Pharmacy network and wholesaler Uniphar was the top performer on the Iseq, finishing up almost 5.5 per cent to €1.24 after it announced two acquisitions worth €40 million that give it a beachhead for further European expansion.

Ryanair was up 2.9 per cent to €13.90 on a positive read-through from rival EasyJet, which announced profits at the top end of market expectations.

It was a mixed day for Irish food companies. Kerry Group slipped 2.1 per cent to close at €115.40. However, Glanbia rose 0.5 per cent to €11.30, while agri-business group Origin Enterprises climbed 2.75 per cent to €4.48 per share after it was traded heavily in the afternoon.

The blue-chip index added 0.2 per cent thanks in part to Halma, which climbed 8.5 per cent after an upbeat half-year report. Rival Intertek also advanced 3.7 per cent.

Puretech Health led gains as it soared 16.5 per cent a day after a schizophrenia drug from its affiliate Karuna Therapeutics met the main goal in mid-stage trials.

There was a 5.3 per cent rise in budget airline EasyJet after it posted annual profit toward the top end of its expectations. The carrier also announced its intention to operate net-zero carbon flights across its network.

Small-cap lights manufacturer Dialight plunged almost 20 per cent to its lowest in nearly a decade as the ongoing US-China trade war forced it to warn on profits.

France’s Cac index closed down 0.35 per cent, while the Frankfurt exchange Dax rose 0.11 per cent.

The media sector was among the weak spots due to a 23 per cent slide for Luxemburg-based satellite provider SES after the Federal Communications Commission chairman backed a public rather than private auction of spectrum for next-generation 5G wireless networks.

Automakers rebounded from their worst session in more than a month as data showed passenger car registrations in Europe rose to their highest since 2009 in October.

Miners and industrials gained 0.4 per cent each.

Home Depot fell 5 per cent and was the top drag on the S&P 500 and the Dow after the US home improvement chain cut its 2019 sales forecast for the second time this year.

Other retail stocks also fell on the news, driving the S&P 500 retail index down 1.1 per cent. Investors await reports from Lowe’s, Target and Nordstrom among others this week for clues on consumer confidence and spending.

AT&T fell 3.5 per cent after MoffettNathanson downgraded the US wireless carrier’s stock to “sell” from “neutral”.

Chipmaker Broadcom rose 3.1 per cent after Morgan Stanley upgraded its shares to “overweight” from “equal-weight”.

Heading into the afternoon session, seven of the 11 major S&P 500 sectors were lower, with the consumer discretionary index’s 0.82 per cent drop weighing the most. The three main US indexes had opened higher on continued optimism that the US and China would agree on a deal to end a damaging trade war.