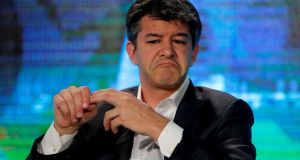 Travis Kalanick, Uber’s ousted co-founder, sold more than $500 million (€452 million) worth of stock in the days immediately after restrictions were lifted on early investors selling their shares.

The so-called “lock up” that prevents insiders from selling shares for six months after Uber’s initial public offering expired on Wednesday.

Mr Kalanick, who was forced out of Uber in 2017 after a sequence of scandals, last year sold around $1.4 billion worth of stock to a consortium of investors led by SoftBank. He also sold a smaller amount as part of Uber’s IPO in May.

Investors in the ride-hailing pioneer have had a rough ride since Uber’s IPO. Its shares have shed more than a third of their value since the blockbuster listing. Monday’s news of Mr Kalanick’s stock sale came alongside another 2 per cent decline, as Uber stock opened at $26.47, down from its $45 IPO price.

Mr Kalanick cashed out more than $540 million worth of Uber shares in a series of trades last week, starting on Wednesday, according to a regulatory filing published on Monday. In total, he sold about a fifth of his remaining stake last week.

The trades formed part of a Rule 10b5-1 plan, which typically allow insiders to sell a number of shares within a pre-determined timeframe and price range, so as to avoid allegations that directors and other company officials have used material non-public information for personal gain.

Mr Kalanick still serves on Uber’s board alongside his co-founder Garrett Camp. Since leaving Uber, he has been investing heavily in his new business, CloudKitchens.

The Los Angeles-based company, whose parent is City Storage Systems, rents out kitchen space all over the world to restaurants and start-ups, primarily for delivery through food-ordering apps such as Uber Eats, DoorDash and Deliveroo.

With a remaining stake of 4.5 per cent, Mr Kalanick is still one of Uber’s largest individual shareholders. His more than 75 million shares are currently worth more than $2 billion.

Uber declined to comment on the sale. A spokesperson for Mr Kalanick did not immediately respond to a request for comment. – Copyright The Financial Times Limited 2019