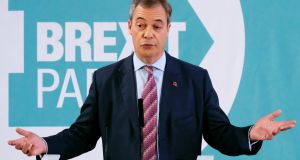 Irish shares rallied as Nigel Farage, leader of the Brexit Party in the UK, boosted the chances of Boris Johnson getting his EU withdrawal deal over the line

Irish shares rallied in the final hours of trading on Monday as Nigel Farage, leader of the Brexit Party in the UK, boosted the chances of Boris Johnson getting his EU withdrawal deal over the line by saying he would not contest Conservative-held seats in the country’s upcoming election.

The Iseq – the most Brexit-sensitive national stocks index in Europe – ended trading 0.4 per cent higher at 6,839.82, having spent much of the session under water. The pan-European Stoxx index closed flat, while a rise in sterling sent the FTSE 100 down 0.4 per cent given the dominance of UK exporters in that index.

AIB rose 3.4 per cent to €2.97 to lead Irish banking stocks higher on the back of the latest Brexit speculation. The bank, which had been rattled in recent weeks by a badly-received trading update, also benefitted from upbeat broker commentary from Goodbody Stockbrokers on Monday.

“Price action suggests that the possibility of fewer obstacles in the way of an outright Conservative Party majority would be welcomed by sterling buyers,” Cityindex analyst Ken Odeluga said. “Given the fact that a bigger parliamentary Tory party could pass Boris Johnson’s Brexit deal more easily, uncertainty that has hamstrung Britain’s economy would be curtailed.”

Glanbia was also in demand, advancing 2.3 per cent to €11.56. Cantor Fitzgerald analysts said the stock had become “unjustifiably cheap” following a sell-off in recent months.

Bucking the trend Providence Resources lost 4.8 per cent, and Malin Corp declined by 2.7 per cent.

A mix of rising tensions in Hong Kong, dampened US-China trade sentiment and a firmer pound hit the exporter-heavy FTSE 100. Asia-exposed banks HSBC and StanChart and mining stocks were lower.

The main bourse handed back nearly all the gains it accumulated last week as the latest Chinese data disappointed and US president Donald Trump cast doubt on the progress of trade negotiations with Beijing.

Brexit-sensitive stocks such as housebuilders also cheered the Brexit Party news, with blue-chips Taylor Wimpey, Persimmon, Barratt and Berkeley up 2 per cent to 3.6 per cent.

European miners took the biggest sectoral hit, down 1.4 per cent after data from top metals consumer China showed producer prices fell the most in over three years in October.

Shares in recent stock market debutant TeamViewer gained 3.6 per cent after the German software company reported a near-doubling in core profits in the third quarter.

Hopes of a “phase one” trade deal and largely upbeat corporate earnings sparked a rally that helped the three major stock indexes close at record highs on Friday.

Mr Trump said on Saturday that the US would only make a deal if it was the “right deal” for America, adding that the talks had moved more slowly than he would have liked.

Walgreens Boots Alliance jumped after Bloomberg reported KKR had formally approached the drugstore giant for what could be the biggest-ever leveraged buyout.

Among other stocks Qualcomm fell after Morgan Stanley downgraded the chipmaker to equal-weight from overweight. – Additional reporting, Reuters

1 Facebook content moderator lodges High Court action
2 Chris Johns: Digital equality must be moved up the priority list
3 Covid Tracker app throws spotlight on Google data harvesting
4 MSD buys Takeda biologics plant in Dunboyne
5 Data centres will force State to choose between climate and investment
6 Covid-19 has distracted us from the looming threat of Brexit
7 How safe is it to go back to the office?
8 Cinema tensions laid bare by deep crack in theatrical release windows
9 It is never too early to talk about saving for Christmas
10 Irish tourism must also help itself to survive the pandemic
Real news has value SUBSCRIBE