Iseq down 1.2 per cent, with Kerry among main decliners 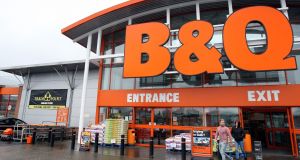 Kerry Group was among the main decliners, falling 3.9 per cent to €112.10, as its main shareholder Kerry Co-op took advantage of the stock hitting an all-time high earlier this week to sell €90 million worth of shares.

Origin Enterprises slid by 7.3 per cent to €4.16 as the agri-services group issued a profit warning as Irish and UK farmers experienced lower crop plantings following abnormally high rainfall levels in the three months through October.

Ryanair was also out of sorts, falling by 0.8 per cent to €13.80, as a Spanish court ruled against its policy of charging an extra fee for hand luggage.

The FTSE 100 lost 0.8 per cent on its worst day in almost three weeks, as trade concerns weighed on Asia-exposed financial stocks such as HSBC, while oil majors Shell and BP and industrial stocks also slipped.

Shares in Aviva fell 3.5 per cent as investors were underwhelmed by a strategy update from the insurer, which analysts say is struggling for direction since replacing its top boss.

Domestic stocks, which have benefited from polls indicating a likely Conservative victory in the upcoming election, weakened after three sessions.

Markets are viewing a prospective Tory victory as a positive on hopes that prime minister Boris Johnson, with a majority in parliament, will be able to reduce uncertainty by delivering Brexit by the January 31st deadline.

Better-than-expected earnings released by pubs operator Mitchells & Butlers, which is 23.5 per cent own by Irish billionaires JP McManus and John Magnier, pushed its stock up 5.5 per cent.

Other news-driven moves saw Aim-listed Fevertree, which slid in early trading, recoup to rise 8 per cent as the market seemingly shrugged off the tonic water maker’s revenue warning to focus on sales growth in the US.

European shares logged their worst day in three weeks on Wednesday on mounting worries that rising US-China tensions could take a toll on trade negotiations between the two countries.

The pan-European Stoxx 600 slipped 0.4 per cent, with London’s FTSE 100 leading declines among most regional indexes trading in the red.

The travel and leisure sectors posted the steepest slide among sub-sectors, led by losses in UK’s SSP Group shares after the airport and train food operator issued a cautious full year outlook.

Home improvement retailer Kingfisher slumped 7 per cent and was at the bottom of the benchmark index after it reported a decline in quarterly sales.

On the bright side, Nexi shares jumped 5 per cent, helping the Milan index stay in positive territory, after Italy’s biggest retail bank Intesa Sanpaolo said it was in early talks with the payments group for a potential deal.

Target and Lowe’s were the bright spots, with their shares jumping, after the two companies also raised their profit forecasts.

The interest-rate sensitive financial index fell 0.4 per cent after the benchmark US 10-year Treasury yield hit a three-week low. Banks lending margins are typically squeezed in a low interest-rate environment.