Iseq down 1.1% as most larger stocks decline 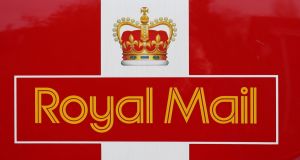 European stocks were under pressure on Thursday after a political stand-off between the US and China cast severe doubt over prospects of a trade deal.

Equities dropped for a fourth straight day as the mixed headlines on the US-China front muted investors’ appetite for risk. However, European markets closed off their session lows.

The Iseq index fell 1.1 per cent on a day when the majority of its biggest stocks finished in the red. Building materials group CRH finished 0.6 per cent lower at €33.24 ahead of its quarterly trading update on Tuesday, while Ryanair fared worse, ending 1.1 per cent down.

There was a similar fall for Smurfit Kappa, with the paper and packaging group dropping almost 1.2 per cent to €31.08.

After a 3.9 per cent decline on Wednesday, food group Kerry slipped a further 0.5 per cent, finishing at €1.75.

The Ftse 100 slid 0.3 per cent, with the domestic-focused Ftse 250 falling 0.5 per cent as a plunge for Royal Mail weighed on the index.

The mid-cap Royal Mail plummeted 14.2 per cent, having earlier traded down more than 17 per cent, as the former postal monopoly warned it was running behind schedule with a turnaround plan and suggested pressures would result in either a break-even or loss-making position in 2020-2021.

British American Tobacco climbed 3.8 per cent after the US regulator dropped plans to sharply cut nicotine in cigarettes.

Utility giant Centrica advanced 9 per cent after it said it had eased the rate of customer losses.

Bookmaker William Hill finished up 1.5 per cent after it said it remained “on track” to hit forecasts.

But chemicals group Johnson Matthey tumbled 7.1 per cent after reporting a lower profit and forecasting annual performance to fall below last year.

German conglomerate Thyssenkrupp suffered its worst day in 19 years after scrapping its dividend. Its shares tumbled more than 13 per cent as it warned of deeper losses and asked investors for yet more patience over its turnaround.

LVMH slipped 0.9 per cent after Reuters reported that the French luxury group had persuaded US jewellery chain Tiffany to provide access to its books after it raised its bid to close to $16 billion.

European miners, among the most vulnerable to trade headlines, led sector losses, dropping more than 1 per cent, while technology and industrials lost about 0.4 per cent. The pan-European Stoxx 600 is now set for its first weekly drop in seven.

Wall Street’s main indexes fell after conflicting headlines on US-China trade relations and a row between the world’s top two economies over the Hong Kong protest added to doubts whether a deal could be reached by the end of this year.

Stocks had opened flat after a report that the US could delay tariffs on Chinese imports even if a deal was not reached by December 15th, when tariffs kick in on goods including items such as electronics and Christmas decorations.

Tiffany & Co gained about 3 per cent after the Reuters report that LVMH had persuaded Tiffany to allow it to access its books.