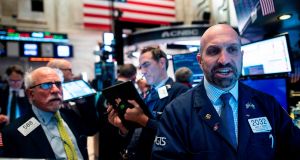 European shares closed lower on Thursday as a warning from German carmaker Daimler and weak economic data from major economies added to concerns about a global slowdown. The pan-European Stoxx 600 index slipped 0.3 per cent, with most sectors in the red and automakers leading losses, down 1.4 per cent. Daimler dropped about 4.5 per cent, the biggest decline on Germany’s blue-chip index after the carmaker said tougher emissions rules would hit earnings in 2020 and 2021. It said it was cutting staff costs at its Mercedes-Benz business to seek more than €1 billion in savings. “It’s been well known that the shift to electric will be a difficult one and there is a no real timeline on when the companies will start seeing a turnaround,” said Ken Odeluga, market analyst at City Index in London.

DUBLIN
Swiss-Irish food group Aryzta saw its shares rise 10 per cent to 98 cent following the company’s annual general meeting in Zurich, at which a sizeable rump of shareholders voted against its compensation report. The company, chaired by former Smurfit Kappa executive Gary McGann, has embarked on a major restructuring after difficulties in the US market caused a collapse in its share price.

Ryanair shares fell 1.3 per cent to €13.60 after a strong few weeks, anchored by comments from the Organisation of the Petroleum Exporting Countries (Opec) about lower-than-expected US shale production, which will push oil prices up in the future.

Shares in Tullow Oil fell a further 18 per cent after it warned this week about the commercial viability of two major oil discoveries in Guyana and reported poor production in Ghana. AIB was up 1.5 per cent at €2.91, while rival Bank of Ireland traded flat. Ires Reit, the State’s largest private landlord, was up 1.3 per cent at €1.72 despite figures showing property price inflation at six-year low of 1.1 per cent.

LONDON
London’s Ftse 100 slid 0.8 per cent as a 6 per cent drop in private equity company 3i and a handful of stocks trading ex-dividend overshadowed an earnings-driven jump in luxury brand Burberry, which climbed 3 per cent . Burberry enjoyed solid share gains as it shrugged off woes in Hong Kong to hike half-year adjusted operating profit by 14 per cent to £203 million.

FirstGroup, the parent of Aircoach, was also in sharp focus in the Ftse 250 Index as it lost nearly a fifth of its stock market value, plunging 18 per cent or 23.9p to 105.4p. The bus and rail firm said it sank to a £187.1 million pretax loss in the six months to September 30th due to ongoing problems in its US Greyhound coach business, which it is offloading.

Back in the Ftse 100, oil giants Royal Dutch Shell and BP were among the list of share fallers as the cost of crude came under pressure.

EUROPE
European shares fell after data showed the German economy grew just 0.1 per cent in the third quarter, avoiding slipping into a mild contraction thanks to consumer spending, but remaining weak nevertheless. The pan-European Stoxx 600 index closed down 0.29 per cent in London, while Germany’s Dax fell 0.38 per cent. Ten-year bond yields across the euro zone fell around 2 basis points each. Germany, French and Dutch yields reached one-week lows.

Daimler dropped about 4.5 per cent after the carmaker said tougher emissions rules would hit earnings in 2020 and 2021, forcing it to seek more than €1 billion on staffing costs at Mercedes-Benz by the end of 2022. Stoxx 600’s biggest gainer was genetic testing company Qiagen, up 14 per cent after Bloomberg reported scientific instruments maker Thermo Fisher Scientific had approached the company about a potential deal.

NEW YORK
US stocks slipped on Thursday, weighed down by technology shares after Cisco’s dour forecast raised worries of a global economic slowdown and overshadowed strong results from big box retailer Walmart. The pullback in the benchmark S&P 500 and blue-chip Dow Jones Industrial Average came a day after they closed at record highs. Cisco Systems fell 7.5 per cent after the network gear maker said current-quarter revenue would drop 3 per cent to 5 per cent amid declining global spending on its routers and switches, some of which are made in China.

Walmart posted robust same-store sales growth and profit, while also raising its full-year earnings forecast. However, its shares reversed course to edge 0.4 per cent lower after hitting a record high in the session. Strong results from the world’s largest retailer come ahead of a crucial retail sales report by the US Census Bureau on Friday. “Despite all the negative headlines, we are near all-time highs and that is because the fundamentals of the underlying economy are still strong,” said Josh Markman, managing director at Bel Air Investment Advisors.

Ireland Nasdaq-listed Amarin was up 20 per cent as an FDA panel sat to consider broadening the market for its heart drug Vascepa. – Additional: Reuters