Saudi Aramco’s IPO setbacks should be put in perspective

If all goes to plan, firm will have highest market cap of any listed company globally 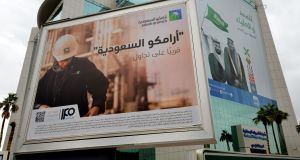 An advert for Saudi Aramco in Riyadh. Photograph: Fayez Nureldine/AFP via Getty

The flotation of Saudi Aramco has been one of the most talked about IPOs in history and also one dogged by setbacks.

The latest issue to arise with the much-hyped listing process involved Saudi Arabia abandoning plans to formally market shares in its state-owned oil company outside the kingdom and its Gulf neighbours.

Bankers were told yesterday that no formal European investor meetings would take place, a day after roadshows in the US and Asia were called off, according to the Financial Times.

The kingdom will now seek to raise about $25 billion (€22.6 billion) through the flotation of Saudi Aramco – just one quarter of what it had once sought.

This is a knock to the ambitions of Crown Prince Mohammed bin Salman, who once pushed for a $2 trillion valuation and had made the IPO the centrepiece of planned economic reforms.

It comes amid concerns about the security of oil infrastructure after the attacks on key facilities in September, governance issues and state interference in Saudi Aramco’s corporate strategy. There are also the growing climate concerns around fossil fuels.

Gathering orders for the shares is set to continue until December 4th, with the stock due to price the following day and then begin trading on Riyadh’s exchange a week later.

In spite of all of the issues around its IPO, Saudi Aramco is still likely to set some new benchmarks. The company is hoping to exceed the $25 billion raised by Chinese ecommerce group Alibaba in 2014, and, if all goes to plan, will have the highest market cap (around $1.7 billion) of any listed company globally, overtaking Apple. Everything’s relative.