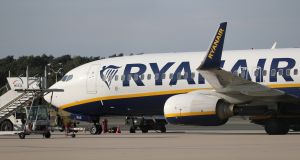 It was a good session for Ryanair, which added 4.8 per cent to €11.78 and more than bounced back from its subdued Tuesday trading. Photograph: Friedemann Vogel/EPA

Wall Street also rallied as hopes grew that the United States and China would hammer out a trade deal.

The Iseq joined in the positive trend, finishing up 1.2 per cent.

Smurfit Kappa was the notable outperformer, climbing 6.1 per cent to €27.30 after publishing strong full-year results. The paper and packaging company outlined plans to increase its dividend by 12 per cent after earnings jumped 25 per cent to a record high.

It was a good session for Ryanair, which added 4.8 per cent to €11.78 and more than bounced back from its subdued Tuesday trading.

Hibernia Reit closed 1.4 per cent lower, despite a trading statement highlighting growth of 2.5 per cent in the value of its portfolio in the fourth quarter of 2018.

Another property investment trust stock, Green Reit, dropped almost 1.7 per cent to €1.42, while Cairn Homes was down 2 per cent at €1.24.

The FTSE 100 added 0.8 per cent, rising to its highest level in four months as mining stocks made gains after copper prices rose and packaging firms DS Smith and Irish company Smurfit Kappa advanced.

Smurfit Kappa surged 7 per cent on its London listing, its best day for a year, while DS Smith added 4.5 per cent.

Irish exploration company Tullow Oil, which has its main listing on the London market, finished 3.9 per cent higher after it reported profits of €75 million for last year and said it would pay its first dividend to shareholders since 2015.

Hopes of a potential Brexit delay lifted blue-chip housebuilders Persimmon, Barratt and Taylor Wimpey, which are among those most vulnerable to a no-deal Brexit.

Whitbread ended 2.9 per cent higher after laying out expansion plans for its hotels business and saying it will buy back an extra £2 billion of shares using proceeds from its Costa Coffee sale.

But tour operator Tui slumped 6.3 per cent, extending losses from the previous session when it posted a bigger first-quarter loss.

The pan-European Stoxx 600 index closed up 0.6 per cent, rising for the third straight session

German lighting company Osram soared 14.3 per cent after it confirmed that it was in takeover talks with Bain Capital and Carlyle Group, which are considering a joint bid for the group.

The rally that began in Tuesday’s session was extended in early trading on Wednesday, before beginning to fade a little. Sentiment had been boosted by rising expectations that the US and China could strike a deal during their ongoing trade talks, while benign inflation data also lifted sentiment.

Energy shares led gainers on the S&P 500. Oil prices rose 2 per cent after top exporter Saudi Arabia said it would cut crude exports and deliver an even deeper cut to its production, although swelling US crude inventories led the market to pare gains.

Cisco, AIG and Yelp were among the companies due to report earnings after the closing bell. – Additional reporting: Reuters / Bloomberg.