Iseq in Dublin rose 1.2%, helped by good performances from some of its heavy hitters 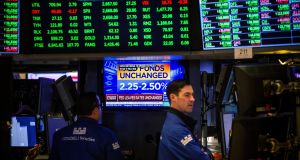 European shares bounced back on Monday as new-found optimism among investors about the new round of trade talks between Beijing and Washington lifted bourses from one-week lows.

US stocks gave up their early gains, however, and were struggling for direction as investors weighed the possibility of another partial government shutdown.

The Iseq rose 1.2 per cent on Monday, helped by good performances from some of its heavy hitters.

Paper and packaging group Smurfit Kappa rose almost 3.2 per cent to close at €25.30, ahead of the release of its full-year results on Wednesday.

Ryanair finished the session ahead by more than 2 per cent to close at €11.34. Investors absorbed the news that chief executive Michael O’Leary, who recently agreed to stay on for a further five years, will be incentivised by a new share scheme.

Globally-exposed CRH, which recently fell under the watchful eye of an activist shareholder group, finished the day up 1.9 per cent at €26.83.

British blue-chip names bounced back buoyed by strength in bank and consumer shares, while a stronger dollar lifted companies with greater international exposure as a fresh round of US-China trade talks commenced.

Among mid-caps, the biggest boost came from takeaway group Just Eat, which climbed 4.4 per cent after its shareholder Cat Rock Capital Management urged the company to start merger talks and said it would benefit from a deal rather than relying on a new chief executive.

Metro Bank, whose stock has roughly halved in value following an accounting error, surged 6.5 per cent stand among top mid-cap gainers following a Berenberg upgrade. Among a handful of losers was Smith & Nephew which slid 3 per cent after the Financial Times reported that it has held talks to buy a US rival.

European markets took their cue from a 1 per cent bounce in Chinese shares, which resumed trading after the week-long Lunar New Year holiday. The pan-European STOXX 600 index rebounded from one-week lows, helped by some deal-making and gains in mining and banking shares. It was up 0.65 per cent.

Banks and financials had a strong session with Italian lenders leading the way after Banco BPM, UBI Banca and UniCredit said their capital ratios met European Central Bank standards. Their shares were up 7 per cent, 3 per cent and 1.9 per cent respectively.

Deutsche Post rose 2.5 per cent on a report saying that Germany was set to grant the postal services firm a higher-than-expected increase in postage for letters to account for fewer letters sent and higher costs.

China’s upbeat tone on trade talks and White House senior counsellor Kellyanne Conway’s bullish comments on a possible deal helped indexes open higher. The gains soon evaporated as the healthcare sector fell 0.21 per cent, pressured by a more than 1.5 per cent drop in the shares of UnitedHealth Group, Pfizer and Merck. The stocks were also the biggest drags on the blue-chip Dow index.

The trade-sensitive industrials sector held on to gains and were last up 0.59 per cent, the most among the 11 major S&P sectors, boosted by Caterpillar’s 1.01 per cent rise.

Electronics Arts gained 5.1 per cent, the most among S&P 500 companies, after analysts were upbeat about a strong start to the videogame publisher’s newly launched rival to Fortnite. Rivals Take-Two Interactive Software Inc fell 3.1 per cent and Activision Blizzard, due to report results on Tuesday, dropped 5.7 per cent.