European shares give up three-month highs after shock US data 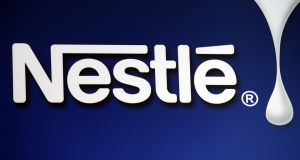 Nestle, the world’s top food and drinks maker, soared to all-time highs after giving an upbeat outlook for the year ahead on an improving outlook in China and North America.

European shares gave up three-month highs on Thursday after a surprise sharp decline in US retail sales pulled stocks lower in afternoon trading, spoiling an initially upbeat session that saw blue-chips such as Nestle shine on strong earnings.

The Iseq followed other European markets lower, ending the day down 0.7 per cent.

Building materials group CRH, which does significant business in the US, was down 1.7 per cent to €26.75 despite growing optimism over trade talks with China.

Ryanair, which on Thursday expressed interest in buying parts of Thomas Cook’s airport slots and downplayed possible strike action over the summer, closed 0.7 per cent lower at €11.69.

Beleaguered Datalex was down 7.6 per cent to 73 cents after revealing details of its restructuring plan.

The FTSE 100 added 0.1 per cent, outperforming its US and European peers, though the FTSE 250 was down 0.4 per cent as ConvaTec tanked.

AstraZeneca surged 7.5 per cent – its biggest intra-day gain in nearly two years - after its fourth-quarter sales beat expectations and it forecast sales growth for 2019. Software company Micro Focus led the blue chips, as its stock jumped 12.3 per cent on its best day in nearly four-and-a-half years after it reported annual pro-forma revenue fell less than expected.

The pan-European STOXX 600 closed down 0.2 percent after spending the first half of the day in positive territory.

Airbus delivered better-than-expected results, taking some of the sting out of news that Europe’s largest aerospace group has abandoned its flagship A380 programme. Its shares jumped at the open and ended the day up 2.7 per cent.

Nestle, the world’s top food and drinks maker, soared to all-time highs after giving an upbeat outlook for the year ahead on an improving outlook in China and North America. It rose nearly 3 per cent in early trading, ending the day up 1.6 per cent.

Banks were a mixed bag, with Commerzbank rising after its quarterly results beat expectations, while results from Credit Suisse and Credit Agricole failed to ignite much love from investors. Their shares were down 3.4 per cent and 0.9 per cent respectively.

US stocks fell on Thursday, led by declines in consumer and bank shares, after bleak retail data fanned concerns about retailer earnings and led to increased bets of interest rate cuts, with losses capped by optimism over China-US trade talks.

Shares in Amazon were down 0.3 per cent after it said it would not move forward with plans to build a headquarters in New York after rising opposition from local politicians

Coca-Cola Co tumbled 7.6 per cent after the world’s largest beverage company forecast slowing sales in 2019 and lower demand for its fizzy drinks in some markets.