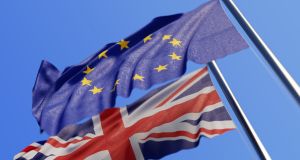 Investors looking at the UK need to get to grips with two high-impact scenarios: a cliff-edge EU exit and the advent of a Labour government, Citigroup analysts said in a report game-planning Brexit risks.

“Little time and scope for a deal on future UK-EU relations is left,” Christian Schulz, director of European research with Citigroup Global Markets, wrote in a note Monday. “A ‘transition-only’ withdrawal deal is now base case, but the risk that UK politics lead to an accidental ‘no deal’ is non-negligible.”

A government led by opposition Labour leader Jeremy Corbyn could mean “maverick” economic ideas – but a softer Brexit that could offset investment concerns, Mr Schulz said. A no-deal scenario could trigger a “large one-off shock to UK output” and would be especially harmful to manufacturing and financial services, while inflation would rise, he said.

Fiscal risks would be highest if Corbyn becomes prime minister due to a Brexit-triggered general election, with the possibility of greater government-bond issuance weighing on the long end of the yield curve, according to rates strategist Jamie Searle. A No-Deal scenario would likely lead to emergency interest-rate cuts, while a Brexit deal means earlier and faster rate hikes - potentially as soon as May, he said.

Under both the Corbyn and the No-Deal scenarios the pound would reach a new low, with an estimated 5-to-10 per cent depreciation in the currency’s trade-weighted index, foreign-exchange strategist Jamie Fahy said. On the other hand, a transitional Brexit deal could see the pound bounce back in a 2-to-5 per cent relief rally, he said.

A No-Deal or change in government would threaten UK stock returns, which have thus far topped fixed income and currency assets, wrote equity strategist Jonathan Stubbs. In the case of a Corbyn government, investors could adopt a hedged strategy that leans on stocks with high international exposure, surplus free cash flow and strong balance sheets, he said.

A Brexit deal would suggest a continuing “dividend bull market” for UK stocks, with more to come next year - boosted by dividend growth in financials and commodities, Mr Stubbs said. A stronger pound would be supportive of domestic shares in a Deal scenario, with real estate, financials and general retailers getting a boost while pharmaceuticals, beverages and tobacco would struggle, he concluded. – Bloomberg