Hammond: Technology may be solution to frictionless Border trade

Tory conference: Exchequer chancellor calls on party to stand ‘four-square’ behind May

British Brexit minister Dominic Raab has warned the European Union against trying to bully the United Kingdom into signing a deal that would undermine the unity of the country. Video: Youtube.com/Conservatives 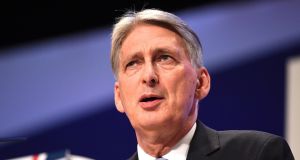 A solution to providing frictionless trade across the Irish border after the UK leaves the European Union might be found using technology such as blockchain, British chancellor of the exchequer Philip Hammond has said.

“There is technology becoming available. . . I don’t claim to be an expert on it but the most obvious technology is blockchain,” Mr Hammond said when asked about how the government could achieve smooth trade after Brexit.

Blockchain is a transparent and secure database that can be shared either among a limited private group or made available more publicly.

Mr Hammond said Europe would remain Britain’s largest trading partner and there was a need for friction-free access to the EU to continue.

“That’s why I share the prime minister’s determination to get the Chequers plan agreed,” he said.

Mr Hammond called on Conservatives to stand “four-square” behind Ms May as she enters the final weeks of negotiations ahead of a hoped-for deal in November.

In a scathing attack on Boris Johnson, he dismissed the former foreign secretary’s Brexit proposals as “fantasy world” and said he does not believe he will ever be prime minister.

He told Sky News: “Of course, Boris is a big personality, nobody is denying that. What I’m saying is that the business of government is a process of attention to detail, follow-through, lots of hard work. “It isn’t just about making flamboyant statements and big announcements, it’s about getting things done.”

Mr Hammond also said rebalancing trade with the EU was a delicate process which should be done gradually, and that product standards should stay the same after Brexit.

“We have to be very, very careful and we need a very, very gradual process of rebalancing our trade between Europe and the rest of the world.

“Pulling the rug away from a very large part of our export business in the hope that we can then build up new business to replace it would be highly dangerous.” Mr Hammond said goods regulation in the EU had been stable for the last two decades therefore was relatively easy for British firms to stick with. However, he was “much, much more sceptical” about adopting EU standards on financial services. “This is a fast-developing area that could move in a direction that was very difficult for us,” he said.

His comments come as British Brexit minister Dominic Raab Ms May’s government will not accept two different customs regimes in the United Kingdom after Brexit so the European Union needs to show less dry legalism in talks on Northern Ireland.

“What we’re not going to do is see the United Kingdom carved up into two separate customs regimes . . . that is just not on the table. Frankly, I think it’s outrageous even to contemplate it,” Mr Raab told Sky News on Monday.

“We need to see a bit less dry legalism and dry dogmatism and a bit more of the flexibility that we have demonstrated in our white paper,” Mr Raab said.

Ms May’s ministers came out one by one at their party’s annual conference to warn the EU that they will embrace leaving without a deal if the bloc fails to show “respect” in the talks to end Britain’s membership.

Mr Raab warned the European Union against trying to bully the United Kingdom into signing a deal that would undermine the unity of the country.

“If the only offer from the EU threatens the integrity of our Union then we will be left with no choice but to leave with no deal,” Mr Raab told the Conservative Party conference in Birmingham.

“What is unthinkable is that this government, or any British government, could be bullied by the threat of some kind of economic embargo, into signing a one-sided deal against our country’s interests,” Mr Raab said.

“I find it hard to believe that they would, for narrow political ends, seek to punish Britain in such a crass and counterproductive way,” he said.

Mr Raab called on European Union leaders to start to compromise in talks over Britain’s exit from the EU, as time runs out for a deal to be done.

“If the EU want a deal, they need to get serious. And they need to do it now,” Mr Raab told the Conservative party conference in Birmingham on Monday.

He said the EU’s approach to talks so far had seen “a starkly one-sided approach to negotiation” which had left “no room for serious compromise”.

Meanwhile British foreign secretary Jeremy Hunt has come under fire for comparing the European Union to the Soviet Union during his speech at the conference ” and describing the EU as a prison.

He said he had voted to remain in the EU, but now supported leave because of what he called the EU’s “arrogance” during Brexit negotiations.

He said the EU seemed to want to “punish” a member for leaving, and likened their tactics to the Soviet Union.

“The lesson from history is clear: if you turn the EU club into a prison, the desire to get out won’t diminish, it will grow - and we won’t be the only prisoner that will want to escape.

His comments did little to soothe relations, provoking those eastern members of the bloc which only regained full independence after the collapse of the Soviet Union in 1991.

They joined the EU more than a decade later. Lithuania’s EU commissioner Vytenis Andriukaitis told Mr Hunt he was born in a Soviet gulag forced labour camp and was jailed by the Soviet KGB state security agency. “Happy to brief you on the main differences between EU and Soviet Union,” he said. “Anytime. Whatever helps.”

Peter Ricketts, who ran the UK foreign office between 2006-10 and is a former ambassador to France, tweeted: “This rubbish is unworthy of a British foreign secretary. The EU isn’t a Soviet-style prison. Its legal order has brought peace and prosperity after a century of war. Our decision to leave was always going to leave us worse off. The only punishment is the self-inflicted variety.”

–Reporting from Reuters, PA and Guardian News and Media 2018