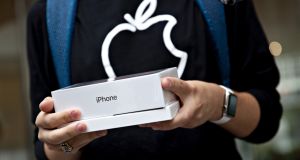 In the United States, stocks climbed and the dollar jumped to a two-week high, the day after the Federal Reserve cited a strong economy in its decision to raise interest rates.

The Iseq index advanced for the second consecutive day, edging up just shy of 0.2 per cent, slightly behind the gains for the major European indices.

There was little stock-related news propelling share price movements, but financial stocks came under some pressure, notably Bank of Ireland, which slipped 1.6 per cent to €6.90.

Paper and packaging group Smurfit Kappa, which has been weak of late after its write-offs in Venezuela, bounced back 2.6 per cent, closing at €34.24.

Ryanair also shook off negative strike-related sentiment, as well as the higher oil prices that weighed on London-listed EasyJet and IAG. The airline added 0.3 per cent to €13.15, while building materials group CRH closed up 0.35 per cent at €28.40

The FTSE 100 index added 0.45 per cent, helped by a drop in sterling and gains for oil and gas companies on the back of high oil prices.

Among the top FTSE gainers were tobacco group BAT, spirits maker Diageo and drugmaker Shire, which all rose more than 1 per cent, while BP was the highest riser in the oil sector, adding 1.2 per cent.

Motoring parts and cycling retailer Halfords warned higher investment in stores meant profit would be lower than previously forecast, sending its shares down 8 per cent. The company declined to comment on a Sky News report that it has bid for smaller rival Evans Cycles.

DCC, the Dublin-headquartered sales, marketing and support services group with a listing in London, completed its share placing, raising £600 million to fund further acquisitions. The stock, which ended 4 per cent lower, earlier announced the acquisition of Canadian audio specialist Jam.

Drugmaker Indivior fell another 13 per cent, adding to losses after a 16.5 per cent dive on Wednesday after it slashed a revenue forecast for its opioid addiction drug Sublocade.

The pan-European Stoxx 600 index rose 0.4 per cent to a one-month high, having earlier lost as much as 0.6 per cent. Italian stocks were running down 2 per cent, but recovered somewhat to close down 0.6 per cent. Italy’s economic ministry was forced to deny that its chief Giovanni Tria, an academic who doesn’t belong to any one party, had threatened to resign.

Danish healthcare company Ambu saw its shares fall 16.7 per cent with traders citing a negative note from Nordea. Chipmaker AMS fell 6.4 per cent after UBS analysts cut their price target on the stock.

In positive moves, the Swedish fashion retailer H&M jumped 11.1 per cent after reassuring investors it would not need to cut costs further to shift unsold clothing.

Apple rose 2.5 per cent, providing the biggest boost to the three main indexes after analysts at JP Morgan started coverage of the stock with an “overweight” rating. Amazon rose 1.9 per cent after brokerage Stifel talked up its businesses, while Facebook gained 2.6 per cent.

Oil edged higher, driven by the prospect of a shortfall in global supply once US sanctions against major crude exporter Iran come into force in just five weeks’ time. – Additional reporting: Reuters.