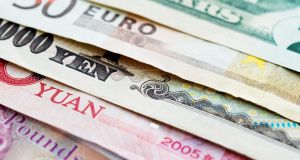 The euro dropped on mounting uncertainty about Italy’s fiscal position, and the dollar pushed higher as emerging-market currencies slid. Stocks in Asia were mixed.

The common currency weakened after the head of Italy’s lower house budget committee said the nation would have solved its fiscal problems with its own currency. European futures declined alongside their US counterparts. Japan’s Nikkei 225 Stock Average ticked higher a day after closing at its highest since 1991. Stocks in Hong Kong underperformed as traders returned from a long weekend, and equities also fell in Australia and South Korea. China’s markets are shut.

Global investor sentiment remains fragile, even after a deal between the US and Canada to revamp the Nafta bloc with Mexico. Bank of America Merrill Lynch analysts joined JPMorgan Chase and Co. in downgrading forecasts for the Chinese yuan and other Asian currencies in recent days.

Sino-American tensions remain in focus after the Chinese navy dispelled an American missile destroyer from waters near South China Sea islands, in China’s account of the incident. Meantime, political drama in Washington still swirls around President Donald Trump’s Supreme Court nominee, which may feed through to November congressional elections and affect the outlook for the administration’s agenda.

Elsewhere, oil consolidated around its highest in almost four years as a slowdown in US drilling adds to concern over supply losses from Iran and Venezuela.

Russia’s oil production rose to a post-Soviet high last month as the country completely rolled back the output cuts it had agreed on with Opec. The country pumped 46.478 million tons of oil and condensate in September, the Energy Ministry’s CDU-TEK statistical unit said Tuesday. That equates to a record 11.356 million barrels a day and follows Russia’s agreement with Opec to boost supplies amid climbing prices. Opec itself raised output by some 30,000 barrels a day last month as deepening losses in Iran due to looming US sanctions were countered by other members, a Bloomberg survey showed.

Russia’s September production climbed by nearly 150,000 barrels from August and exceeded the previous high of 11.247 million barrels a day reached two years ago. That shows the country has completely erased the cuts it agreed on with the Organization of Petroleum Exporting Countries in 2016, and has now added more than 100,000 barrels a day. That’s higher than the level suggested by Energy Minister Alexander Novak in June, when he said that Russia’s production would rise by 200,000 barrels a day - from its promised 300,000-barrel-a-day cut - and that it would maintain that output through the second half of the year.

Indonesia’s rupiah fell past 15,000 per dollar for the first time since 1998 a day after inflation came in slower than forecast, giving the central bank less cause to raise interest rates further.