European stocks buoyed by new Nafta trade pact between US, Canada and Mexico 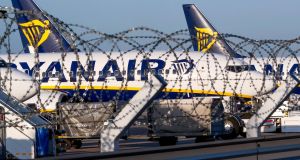 Ryanair dominated market news with a warning that strikes and high fuel prices could leave profits at €1.1 billion-€1.2 billion for the current financial year instead of the expected €1.25 billion-€1.35 billion.

Bank of Ireland came under pressure during the day, dropping as much as 1.6 per cent to €6.49 before rallying strongly ahead of the close to end the day at €6.58.

Insurer FBD climbed 3.45 per cent to €10.50 after announcing that it intended to repay Fairfax’s convertible bond for €86 million. The underwriter will raise €50 million through issuing a new subordinated bond.

Royal Mail shares collapsed as the firm issued an afternoon profit warning after it failed to meet cost-saving targets. In an unscheduled trading update for the half year to September 23rd, Royal Mail said that it expected group adjusted operating profit to be in the range of £500 million-£550 million, compared with £694 million last year. The news sent shares plummeting as much as 20 per cent before closing down 18 per cent, a fall of 85.7p to 391.4p.

Irish-Swiss baker Aryzta climbed as much as 30 per cent after reporting a €470 million loss for the 12 months ended July 31st, but saying it expected the troubled business to stabilise in the current financial year.

However, it surrendered some of those gains when its biggest shareholder, Cobas, questioned plans to raise €800 million. The maker of McDonald’s burger buns and owner of La Brea Bakery ended the day 15.16 per cent ahead at 9.48 Swiss Francs in Zurich.

Fresenius shares topped the Stoxx index with an 8.3 per cent gain after a Delaware judge ruled the German healthcare group could walk away from its $4.75 billion deal for US drugmaker Akorn Inc and rejected Akorn’s claim that the merger agreement had been breached.

Linde jumped 6.2 per cent after the German industrial gases maker received approval for its proposed $83 billion merger with Praxair from the Chinese antitrust authorities.

Wall Street got off to a strong start of the fourth quarter on Monday, with industrials and automotive stocks rallying after a last-minute deal to salvage the North American Free Trade Agreement.

Auto maker Ford jumped 1.6 per cent while General Motors gained 1.3 percent. General Electric soared 9.6 per cent and was set for its best day in 3½ years, after replacing chief executive John Flannery with board member Larry Culp.

Tesla shares soared 16.1 per cent as signs it had met targets for quarterly production numbers added to relief at chief executive Elon Musk settling a lawsuit with regulators that could have forced him out. – Additional reporting: Reuters