Pressure builds on May to present her Brexit border plan 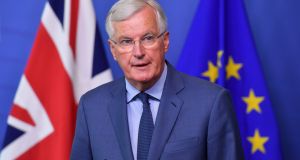 Warnings about the threats to the constitutional integrity of the UK raised the political temperature in the Brexit negotiations and the EU’s chief negotiator Michel Barnier (above) has since the summer been trying to “de-dramatise” the backstop in order to resolve the last big remaining issue to agree a withdrawal treaty. Photograph: Emmanuel Dunand/ AFP/Getty Images

Two weeks. That is the time the UK has to present its own guarantee to avoid a hard Irish border and prevent negotiations slipping to a crunch EU summit in November and ever closer to a hard Brexit.

Just six months before the UK leaves the EU, the notorious “backstop” – the fall-back solution to the post-Brexit border if it is not sorted in a future trade deal – remains no closer since both sides agreed there should be one last year.

British prime minister Theresa May agreed in March to include a legal text on an operable backstop – but just not the backstop that the EU has proposed. It would break up her country, she has consistently argued, as it would mean two customs unions within the UK by keeping Northern Ireland under existing EU economic rules.

EU negotiators are still waiting for May’s own proposal so both sides can start negotiating on a legal text and get down to the business of drafting that has been absent from negotiations for many months.

In simple terms, the legally operable backstop – a last resort should all other options fail – is essentially a manual to follow to avoid checkpoints springing up along the new 499km EU-UK frontier from Carlingford to Foyle after the UK departs the EU in March 2019.

“This is a legal text; it is not a political declaration,” said one EU source. “It cannot be fudged. It has to be legally watertight.”

Warnings about the threats to the constitutional integrity of the UK raised the political temperature in the Brexit negotiations and the EU’s chief negotiator Michel Barnier has since the summer been trying to “de-dramatise” the backstop in order to resolve the last big remaining issue to agree a withdrawal treaty.

Should May’s backstop proposal materialise in time and Barnier tells the EU leaders at the European Council summit in Brussels on October 18th that both sides are within touching distance of a deal, then they may agree to  arrange a special Brexit summit probably during the week beginning November 12th.

Finding agreement before then may take the heat out of a November meeting.

The EU would likely agree to the UK staying if it remained fully aligned with EU rules. But since the UK would then have to  apply the external tariff on all non-EU goods, it would  not be able to  agree trade deals with other countries – a red line for the UK.

Last month’s informal EU summit in Salzburg left May desperately clinging onto her “Chequers plan” – which would keep Britain aligned to European standards on goods and food – despite being dismissed by the EU as unworkable and rubbished by the hard Tory Brexiteer rebels ahead of her party conference this week.

To create wriggle room, EU negotiators are behind the scenes preparing an “improved” backstop, softening the language to try to take the political heat out of the border issue.

They are planning to play down the need for extensive checks between Northern Ireland and Britain that would create a border in the Irish Sea or on the island under its backstop.

They may also be willing to agree to a strong political statement saying they believe the backstop will never be used and a commitment to resolve the border issue in a deep trade agreement that will make all trade between the UK and EU as frictionless as possible. Brussels sees this as a way to give May political cover at home.

Noises out of London yesterday suggest that May may be working on some kind of hybrid proposal – a UK-wide customs backstop along with Northern Ireland-specific regulatory alignment with the EU on goods that would require some checks between Northern Ireland and Britain.

She has yet to formally present her counter-proposal on the backstop – a kind of emergency custody arrangement for Northern Ireland if there is to be a divorce before future living arrangements are agreed by the parting couple.