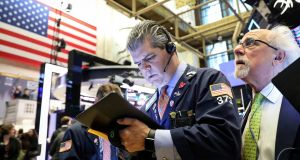 The benchmark S&P 500 index is now just about 2 per cent away from its early May record high. Photograph: Brendan McDermid/Reuters

Hopes of monetary stimulus lifted investor sentiment globally on Tuesday with anticipation of an interest rate cut by the US Federal Reserve. In the US, easing trade tensions played a part in boosting equities.

The Iseq all-share index rose 0.34 per cent on Tuesday after a slow day of trading with little volume, in line with its European peers.

Among the leaders was paper and packaging giant Smurfit Kappa which rose 2.78 per cent to €26.21. The company said it had spent €81 million buying up most of the shares in its Colombian unit – Carton de Colombia – that it didn’t already own.

Budget airline Ryanair was another gainer on the day, rising 0.24 per cent to €10.65 after it confirmed it had agreed to buy Malta Air. Ryanair will move and grow its Malta based fleet of six Boeing 737 aircraft, it said.

Rio Tinto, Antofagasta, Glencore and BHP were between 2.5 per cent and 3 per cent higher, while oil majors BP and Shell were lifted by a rise in crude oil prices.

Troubles on Britain’s high street were reflected on the small- and mid-cap indexes, with Ted Baker falling nearly one-third to a 6½-year low after warning profits would come in well below analysts’ expectations, and fast-fashion retailer Quiz down 23.2 per cent after reporting a 94 per cent slump in underlying pretax profit.

Among midcaps, shares in the listed fund run by money manger Neil Woodford, Woodford Patient Capital Trust, broke a seven-day losing streak to rise 7.5 per cent on their best day in over a year.

Support services group Stobart climbed to a session high after saying that a court of appeal denied former chief executive Andrew Tinkler’s application to challenge parts of an earlier ruling which was in favour of the company. Shares ended 3 per cent higher.

The pan-European STOXX 600 index closed at its highest level since May 17th, with miners, auto stocks and chemical companies tacking on biggest gains after reports that Beijing was opening the door to more spending by local governments.

Shares in industrial conglomerate ThyssenKrupp jumped 4.8 per cent to the top of the DAX index.

Helping Copenhagen-listed shares up 2.5 per cent, Novo Nordisk rose 5.2 per cent as data on cardiovascular outcomes from competitor Eli Lilly’s diabetes drug was seen as underwhelming.

Hugo Boss rose 4.3 per cent after shares of the German fashion house were upgraded to “equal weight” from “underweight” by Morgan Stanley for the luxury retailer’s strategic plan to reposition the brand under two labels.

The benchmark S&P 500 index is now just about 2 per cent away from its early May record high and the Dow Jones Industrial Average is set to rise for the seventh straight day, its longest winning streak in 13 months.

Markets gained as shares of large-cap companies – Facebook, Apple, Amazon. com, and Alphabet – climbed between 0.6 per cent and 2 per cent.