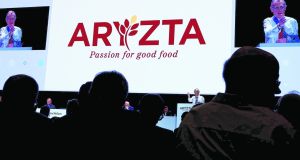 Aryzta chairman Gary McGann during the company’s last annual shareholder meeting. The food group was the best performer on the Iseq on Wednesday. Photograph: Arnd Wiegmann/Reuters

The caution in Europe made the region an outlier, as US Federal Reserve chairman Jerome Powell’s accommodative comments late on Tuesday helped to support assets globally.

Forecourts retailer Applegreen saw shares slide as it became the latest company to blame Brexit for a poor performance. Shares in the Ireland and UK focused group fell by 1.5 per cent to €5.18 at the close of trading.

Dublin-listed oil and resource companies fared poorly, after Brent crude futures tumbled below $60 a barrel on the back of a report that showed US oil inventories ballooning by the most in almost 30 years. This fed fears of a glut as trade disputes threaten demand.

Providence Resources fell 16 per cent to 9 cents, while Petroneft Resources was down 15 per cent, languishing at just over 1 cents per share.

Swiss-Irish food group Aryzta was the best performer on the Iseq on Wednesday, up 5.7 per cent to €108. It clawed back some of the ground it lost on Tuesday, when it released annual results and cut its earnings outlook.

The call by outgoing Central Bank governor Philip Lane for the restoration of bank bonuses did little for the sector, with Bank of Ireland up less than 0.4 per cent to €4.81.

Elsewhere, Non-Standard Finance (NSF) saw shares plummet after it called off its hostile £1.3 billion offer for doorstep lending rival Provident after failing to gain enough backing for the bid. NSF shares closed down 5.5p at 41.5p on Wednesday.

Berenberg trimmed its price target on Madrid-listed Caixabank; its shares fell 3.5 per cent.

Utilities and real estate stocks rose late in the day, especially after comments from Italian deputy prime minister Luigi Di Maio, tacking on 1.4 per cent and 1.1 per cent, respectively. Di Maio complained that Brussels had treated Rome unfairly, but said he wanted constructive talks with the commission.

US stocks rose on Wednesday as expectations of an interest rate cut by the Federal Reserve were lifted following the weakest pace of private sector jobs growth in more than nine years in May.

The defensive utilities and real estate were among the best performing S&P sectors.

Apple was the only gainer among the high-growth FAANG stocks, up 2 per cent. Others in the group – Amazon. com, Facebook, Alphabet and Netflix – lost between 0.1 per cent and 1.1 per cent and pressured the Nasdaq.

Campbell Soup jumped nearly 9 per cent, the most on the S&P index, after the food company raised its full-year profit forecast. Salesforce. com rose 3.2 per cent after a quarterly beat and above expectations full-year forecast.