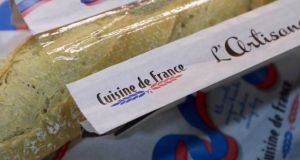 Shares in Arytza, which owns the Cuisine de France brand, fell 13.3 per cent on Tuesday

European shares rose on Tuesday to distance themselves further from a more than three-month low hit during the previous session, aided by car makers that gained on broker recommendations.

The region’s exchanges shook off early weakness from the technology sector, which trimmed losses to end 0.2 per cent lower after reports on Monday that the US is gearing up to investigate whether tech giants including Facebook and Amazon misused their market power.

Swiss-Irish food group Arytza was the main mover in Dublin on Tuesday with its share price tumbling 13.3 per cent to €1.02 after it said it expected low single-digit underlying earnings growth for the year.

Shares in Dublin-listed Malin and Hostelworld, which are both owned by companies linked to fund manager Neil Woodford, also fell after his flagship fund blocked investors from taking their money out. Malin was down by 6.8 per cent to €4.66 while Hostelworld was down 7 per cent to €2.47.

London’s Ftse 100 rebounded as China’s request for dialogue with the United States to resolve trade differences offered respite, while money manager Hargreaves Lansdown tumbled after the suspension of one of the Woodford investment funds.

The Ftse 100, which started the day in negative territory, reversed course to end 0.4 per cent higher, although it lagged its European counterparts due to weakness in oil majors Shell and BP.

Hargreaves Lansdown tumbled 4.6 per cent, among top losers on the main index, after well-known money manager Neil Woodford suspended trading in one of his funds, which is included in six of Hargreaves Lansdown’s Multi-Manager funds.

On the midcap index, shares in Woodford Patient Capital Trust, a listed fund run by Woodford, slumped to an all-time low as investors were spooked by the suspension. Stock ended down 7.9 per cent.

It was a largely positive day in Europe with the Stoxx 600 up 0.7 per cent, while Germany’s Dax added 1.5 per cent, largely due to a rise in sentiment towards car makers and their suppliers.

Hella and Continental surged 5.4 per cent and 3.2 per cent, respectively. Daimler gained 4.1 per cent, supported by RBC starting coverage with an “outperform” rating. Volkswagen, which RBC also rated “outperform”, added 3.3 per cent.

Food and beverage stocks fell 1 per cent, with losses led by Oslo-listed fish farmer SalMar and seafood processor Mowi dropping 5 per cent and 2.6 per cent, respectively.

US stocks rose in mid-morning trade on Tuesday, led by a rebound in the technology sector, as Federal Reserve chair Jerome Powell said the central bank would act “as appropriate” to trade war risks, leaving the door open for a possible rate cut.

The technology sector rose 2.46 per cent, as shares of high-profile companies – Amazon, Apple and Google parent Alphabet – bounced back from Monday’s sell-off, which was triggered by fears of heightened scrutiny from antitrust regulators.

Uber also benefited from the bounce-back gaining 1.6 per cent to $41.86 even as the company announced the Internal Revenue Service was auditing its taxes and as it said unrecognised tax benefits would be reduced within the next year by at least $141 million. The company’s stock has struggled since its market debut on May 10th and is still trading below its IPO price of $45.

Still, the shares have outperformed rival Lyft, which have fallen by a third in value since its own debut in March. Shares in the company were down 0.4 per cent to $59.28 in mid-morning trading. – Additional reporting: Reuters