Healthcare sector drags European share indices back into the black 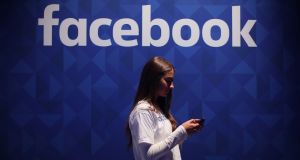 Facebook tumbled 7.4 per cent after reports that the Federal Trade Commission had secured the right to examine how its practices affect digital competition. Photograph: Niall Carson/PA Wire

European shares recovered from early losses to end Monday higher as gains in healthcare stocks helped head off weakness in trade-sensitive sectors such as technology after the latest twist in the US-China trade war.

US stocks went back into the red after regulatory fears sent shares of internet giants sharply lower, particularly weighing down on the tech-laden Nasdaq.

The Iseq index of Irish shares barely moved on wafer-thin trading volumes due to the bank holiday.

The best performer on the day was recruitment group CPL Resources, which finished the session up 3.1 per cent at €6.60 per share. It was followed by dairy group Glanbia, which was up about 1.3 per cent to €15.10.

In line with the performance of their peers across Europe, the two big banks finished the session in negative territory. Bank of Ireland was down 1.2 per cent to €4.74, while AIB fell by 0.5 per cent to €3.66.

The biggest faller was exploration firm Aminex, whose chief executive recently announced his departure. It was down 14 per cent, although the percentage of any price move is exaggerated by its literal status as a penny stock. Aminex is just over 1 cent per share.

China warned the US at the weekend not to meddle in security disputes over Taiwan and the South China Sea, while US president Donald Trump threatened to impose tariffs on all Mexican goods.

In response, investors on Monday pooled their money into stocks that are deemed less risky at times of macro-economic uncertainties. AstraZeneca and GlaxoSmithKline led gains on main index, while retail giants Diageo and Unilever also climbed.

Construction group Kier was the biggest faller on the Ftse 250 index, down 41 per cent and at its lowest level since early 1999 after a profit warning and growing fears of a dividend cut and more fund-raising due to mounting debts.

The pan-European Stoxx 600 gained 0.4 per cent. Germany’s Dax rose 0.6 per cent, shaking off pressure from a 8.1 per cent slide in Infineon’s shares after the chipmaker agreed to buy Cypress Semiconductor for $10 billion.

Payments firm Wirecard rose 3.6 per cent following a tweet by chief executive Markus Braun on Sunday saying the company was “steering towards an outstanding first half year of 2019”.

Merck was a source of optimism to both Germany’s Dax and the Stoxx 600, rising 2.1 per cent. It reported Phase II results for an investigational therapy.

Financial services stocks fell 0.7 per cent, with Bolsas y Mercados Españoles leading the losses with a slide of 3.8 per cent. The Spanish exchange operator reported a 22.3 per cent year-on-year drop in trading volumes for May.

Banks dipped 0.5 per cent, with Natixis sliding 4 per cent. Credit Suisse cut its target price on the French lender’s stock to €4.90 per share from €5.70.

Travel group TUI fell 4.4 per cent as its contingency measures to cope with the grounding of Boeing 737 Max jets were triggered.

Facebook tumbled 7.4 per cent after the Wall Street Journal reported that the Federal Trade Commission had secured the right to examine how the social media company practices affect digital competition.

Alphabet tumbled 6.7 per cent after sources told Reuters the US Justice Department was preparing an investigation to determine if the Google-parent broke antitrust laws.

Amazon slipped 4.3 per cent on a report that the e-commerce giant could be put under the watch of the Federal Trade Commission. Facebook and Alphabet dragged the communication services sector down 3.09 per cent, while Amazon shares pulled the consumer discretionary sector down 1.3 per cent.

Healthcare stocks rose 0.40 per cent, while the Nasdaq biotech index advanced 1.29 per cent, helped by shares of companies including Amgen and Merck that reported positive drug data at an industry conference in Chicago. – Additional reporting: Reuters