Markets report: Easing of tensions over tariffs between US and Mexico lifts global stocks 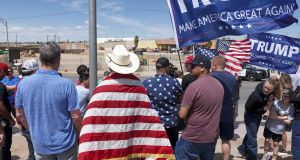 Easing of trade tensions between Mexico and the US lifted the mood of global markets.

Traders said there was some interest in housebuilder Glenveagh Properties, which announced on Friday that it had bought two sites and said it could bid to develop the Nama-controlled Poolbeg site in Dublin.

Ryanair closed 0.23 per cent down at €10.625 but hit a high of €10.725 during trade after it emerged that the Irish airline is looking at opening a carrier in Malta.

Paddy Power and Betfair parent Flutter Entertainment rose 0.21 per cent to €66.26 on a day when rival William Hill put in a good performance.

Plumbing and building supplies group Ferguson plc, formerly Wolseley, a rival of Irish company Grafton, tumbled 4.64 per cent to 5,100 pence despite reporting 2.3 per cent growth in profits to $359 million for the three months to the end of April. Traders said the stock’s exposure to the US left investors wary on Monday.

The move had little impact on Grafton, the Irish-based, London-listed builders’ supplier and DIY specialist. Its shares inched up 0.68 per cent to 884p.

Travel group Thomas Cook soared 17.11 per cent to 18.86p after confirming that it was in take over talks with its biggest shareholder, Fosun Tourism. Bookie and Flutter Entertainment competitor William Hill rose 1.64 per cent to close at 145.45p.

Online grocer Ocado climbed 4.67 per cent to 1,165p following an announcement that it was investing £17 million sterling in vertical farming, that is, growing food indoors in stacked layers.

Investment manager Woodford Patient Capital Trust slid 6 per cent to 59p despite reassuring backers that the freezing of its flagship fund would not hit its “operational performance”.

Housebuilder MJ Gleeson fell 10.84 per cent to 790p after confirming that its chief executive would leave following “extensive” talks on pay and succession planning.

The Europe-wide Stoxx 600 index finished up 0.2 per cent on broad-based gains albeit in thin trading volumes on account of Whit Monday holidays in Germany, Switzerland, Austria and most Nordic countries.

The auto sector gained 0.7per cent on signs that Fiat Chrysler Automobiles NV and Renault SA were looking for ways to resuscitate their collapsed merger plan and secure the approval of Nissan Motor.

Fiat Chrysler climbed 1.7 per cent to €11.87 and Renault shares closed up 2.6 per cent at €55.08 after sources close to the companies told Reuters they were back in discussions on ways to revive the deal.

Spanish banks with business exposure in Mexico such as Santander, Sabadell and Bilbao rose between 1.8 per cent and 2.9 per cent. But the lack of clarity on certain aspects of the US-Mexico deal, and no clear sign of de-escalation in the Sino-US trade conflict, kept sentiment at bay.

US stocks extended their recent climb yesterday, with the Dow reaching its longest daily winning streak in 13 months after the United States dropped plans to impose tariffs on Mexican goods and a couple of multibillion-dollar deals boosted the market.

Mexico on Friday agreed to step up efforts to stem the flow of Central American migrants after Washington threatened to impose a 5 per cent import tariff on all Mexican goods starting yesterday. United Technologies agreed to combine its aerospace business with defence contractor Raytheon to create a new company worth about $121 billion.

Strategists said the Mexico trade news cheered investors, leaving the S&P 500 about 2 percent from its early record high in May. But they noted indexes ended the session well off the day’s highs and feared investors may be trading more on hope than on reality.