Markets report: In the UK, tobacco company Imperial Brands jumped 5.7% on its best day in more than a year 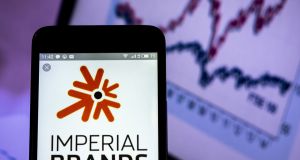 On a good day for defensive picks on the London Stock Exchange, tobacco company Imperial Brands jumped 5.7 per cent on its best day in more than a year

Euro zone shares underperformed their broader European peers on Thursday, hit by a stronger euro after the European Central Bank kept rates untouched but did not provide the outlook that investors had anticipated.

The Iseq fell 0.85 per cent, as key stocks declined. Bank stocks reversed, with Bank of Ireland declining 4.5 per cent to just below €4.60, and AIB and Permanent TSB also in the red on what was a weak day for financial stocks across Europe.

Most of the FTSE 100’s gains came earlier in the session as worries over Washington’s escalating trade tensions with Beijing and Mexico gave way to hopes that major central banks would provide fresh stimulus in response.

On a good day for defensive picks, tobacco company Imperial Brands jumped 5.7 per cent on its best day in more than a year.

However, supermarket chain Sainsbury, retailer Kingfisher and telecoms giant Vodafone shed between 3.8 per cent and 4.8 per cent as the stocks traded ex-dividend.

Investors in insurance company Aviva reacted positively to news it is to cut 1,800 jobs, with the stock closing up 0.7 per cent, having traded higher earlier in the session.

The mid-cap index was cushioned by Peppa Pig maker Entertainment One, which surged 16 per cent, recouping almost all of its losses from the previous session. The company denied media reports that president Mark Gordon was to leave.

Euro zone equities fell 0.2 per cent, while the pan-European Stoxx 600 marked time. A firmer euro trims the value of euro zone companies’ overseas earnings when converted back to the common currency, hitting their overall profitability. Germany’s Dax lost 0.2 per cent, while French stocks fell 0.3 per cent.

European lenders had a torrid day, flipping into negative territory, as the ECB did not detail as generous a cheap loan lending programme for banks as investors had expected.

Auto-makers and their suppliers declined 0.9 per cent, as Renault dived 6.4 per cent after Fiat Chrysler Automobiles walked away from an over $35 billion merger with the French carmaker.

Reports that Berlin authorities were planning to impose a rental cap hit German property firms Vonovia and Deutsche Wohnen, which fell 4.7 per cent and 7.7 per cent respectively.

Wall Street eked out gains in choppy early trading as hopes of an interest rate cut outweighed fears of a flare up in US-China trade tensions after comments from president Donald Trump.

The energy sector, which was the hardest hit by the recent escalation in trade tensions, rose 1 per cent, the most among the major S&P sectors, as oil prices gained.

Oil majors Exxon Mobil and Chevron provided the biggest support with a gain of 1.4 per cent. Advanced Micro Devices rose 5.6 per cent after analysts at Morgan Stanley upgraded the chipmaker’s stock to “equal-weight” from “underweight”. – Additional reporting: Reuters / Bloomberg.

1 We are ‘sale agreed’, but can we go back with a lower offer?
2 Working from home: New costs, new stresses and little relief
3 HSBC board rethinks overhaul and seeks even deeper cuts
4 Eason to lay off 150 staff as it prepares for June reopening
5 Joint accounts: if one of us dies, can the other access the money?
6 ‘Over 1,000’ pubs have interest in Covid-19 insurance test case
7 Lucinda Creighton’s consultancy agrees partnership with US lobbyist
8 Fruit and vegetable firm obtains interim court orders against technical manager
9 Stocktake: Active fund managers fail to earn their keep
10 EU parliament may block fund unless it has grants which do not need to be repaid
Real news has value SUBSCRIBE